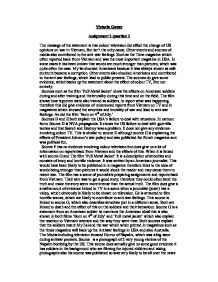 The message of the statement is that colour television did effect the change of US opinions on war in Vietnam, But isn't the only cause.

Victoria Gower Assignment 2 question 2 The message of the statement is that colour television did effect the change of US opinions on war in Vietnam, But isn't the only cause. Other events and sources of media also contributed to the anti-war feelings. Such as the Time magazine which often reported back from Vietnam and was the most important magazine in USA. In some cases it has been known that words are much stronger than pictures, which was quite often the case. My lai shocked Americans because it was always shown as safe etc but it became a corruption. Other events also shocked Americans and contributed to the anti war feelings, which lead to public protests. The sources do give some evidence, which backs up the statement about the effect of colour TV, But not entirely. Sources such as the film 'Full Metal Jacket' show the effects on American soldiers during and after training and the brutality during this time and on the field. ...read more.

This would have been likely to be published in a magazine therefore links to the idea of words being stronger than pictures it would shock the reader and may cause them to resent war. The film has a scene of journalists preparing assignments and reports back from Vietnam. Their aim was to get a good story; therefore they could often bend the truth and make the story seem more intense than the actual truth. The film does give a small amount of evidence linked to TV in a scene when a journalist (joker) has a video, which obviously is likely to be shown on television. He is attracted to film horrific scenes, which are likely to contribute to anti-war feelings. This source is linked to source G, which also describes atrocities just in a different sense. Both are linked to death and the effect of this on the soldiers and their behaviour. Source G is a statement from an American soldier he mentions the American ideal this is also shown in both films 'Born on 4th of July' and 'Full metal jacket' which also explain the reaction to Vietnam veterans and the way they were treat. ...read more.

It gives us some evidence that Media was also having effect on opinions of war but doesn't give us much information. Source K shows gives us some evidence but again not entirely helpful. The votes to bring US back were higher as it got later, this could have been due to influences of colour television and Media and also because basically the war was dragging on and they were high casualties as a result of it. Another effect of the results was probably events such as My Lai and Kent state. Overall sources D-L do give evidence that colour television did influence Anti-war opinions but wasn't just the cause of US's change of opinion as other events and their after effect on America did also contribute, as well as other media of which magazines containing letters and reports back from Vietnam had a huge effect on the public. Basically the Media showed horror of the napalm, death of women and children, and News that war may not be winnable. The scale of media involvement was extremely high and also affected the impact of protest movement on attacks to war. ...read more.