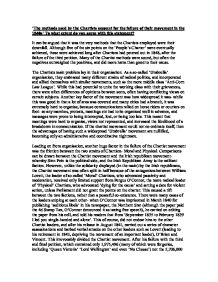 'The methods used by the Chartists account for the failure of their movement in the 1840s' To what extent do you agree with this statement?

'The methods used by the Chartists account for the failure of their movement in the 1840s' To what extent do you agree with this statement? It can be argued that it was the very methods that the Chartists employed were their downfall. Although five of the six points on the 'People's Charter' were eventually achieved, these were achieved long after Chartism had petered out in 1848, after the failure of the third petition. Many of the Chartist methods were sound, but often the negatives outweighed the positives, and did more harm than good to their cause. The Chartists main problem lay in their organisation. As a so-called 'Umbrella' organisation, they embraced many different strains of radical politics, and incorporated and allied themselves with similar movements, such as the more middle class 'Anti-Corn Law League'. While this had potential to unite the working class with their grievances, there were often differences of opinions between sects, often having conflicting views on certain subjects. Another key factor of the movement was how widespread it was- while this was good in that a lot of area was covered and many cities had a branch, it was extremely hard to organise, ...read more.

This caused a rift between the two factions, rather than a peaceful co-existence. There were many cases of the leaders sniping at each other- when O'Connor was imprisoned in March 1840 for publishing 'seditious libels' in his newspaper, the Northern Star (although the paper paid the 4d Stamp Tax, O'Connor denounced it as taxing free speech), he carried on editing the paper from his cell, and told his readers that from 'September 1835 to February 1839 I led you single-handed and alone'. This of course, did not endear him to the other Chartist leaders, and after his release in August 1841, carried out a series of character assassinations and barbed verbal attacks on the other leaders such as Lovett (leading to his retirement in 1842, depriving the movement of an important leader), O'Brien and Vincent. This irrevocably divided the Chartist movement. After his failure with the third and final petition, which contained only 1,975,496 (many of which were forgeries, including 'Queen Victoria' 'Lord Wellington' and even 'No Cheese') not the 5,706,000 he had told the crowd. He was accused of ruining the credibility of the movement, and eventually died in a mental institution. ...read more.

At this point, with Lovett retired and O'Connor in a mental institution, the chartist movement petered out. The very methods used to get themselves into the public eye- mass protests, violent action, mass petitions and incorporating smaller movements- became their undoing, as a result of in-fighting, bad administration, heavy-handed policing and government apathy. The conflict between the main factions of Chartism caused indecision, the death blow of any organisation. The poor coordination between peaceful action and violent action ensured even non-violent protests and mass meetings were quickly dispersed by troops, and the long prison terms and deportation meant the chartists were quite often without capable leaders. I would agree with the statement, because the methods, although gaining some small success at the time, led to the downfall of the chartist movement, and their demands were only implemented at a later time, when the government had carefully evaluated them. The reason the chartists could not get their demands met at the time was down, in the main, to their inability to organise themselves effectively- it is telling that most of the demands were eventually passed without the chartists efforts. ...read more.