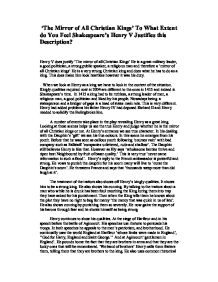 'The Mirror of All Christian Kings' To What Extent do You Feel Shakespeare's Henry V Justifies this Description? Henry V does justify 'The mirror of all Christian Kings' He is a great military leader, a good politician, a strong public speaker, a religious man and therefore a 'mirror of all Christian kings' He is a very strong Christian king and does what he has to do as a king. This does make him look heartless however it was his duty. When we look at Henry as a king we have to look in the context of the situation. Kingly qualities required now in 2004 are different to the ones in 1415 and indeed in Shakespeare's time. In 1415 a king had to be ruthless, a strong leader of men, a religious man, a good politician and liked by his people. Nowadays being a statesperson and a bridger of gaps is a head of states main role. This is very different. Henry had added problems his father Henry IV had deposed Richard II and Henry needed to solidify the Bolingbroke line. ...read more.

At the siege of Harfleur and in his speech before the battle of Agincourt. His speeches use rhetoric to persuade his troops. In both speeches he appeals to the men's patriotism, and brotherhood. He continually uses the world England at Harfleur 'whose limbs were made in England', ''God for Harry, England and Saint George.'' And at Agincourt 'gentlemen in England'. He pounds home the fact that they are brothers in arms and that they are the lucky ones that will be remembered. 'We band of brothers' Henry calls them flatters them, telling them that they are brothers to the king. He also uses common rhetorical devices. He uses groups of three a lot. For instance Harry the king, Bedford and Exeter, Warwick and Talbot, Salisbury and Gloucester.' In this case three groups of two. He uses sibilance 'flowing cups freshly remembered'. Repetition and plays on the desire of men to be remembered. Then we see the humility of Henry. After the battle of Agincourt when the bodies have been counted and the victory is complete. ...read more.

Nowadays a criminal of war. He also seems to play on God is he really a believer or does he just use God. It seems as if he uses him for his own end. Not really believing. He seems to use the church and God. However he does ask for Gods for help. Before the Agincourt. The only time we seem to see Henry for himself is when he is alone. He seems to stop acting and let himself go. Here we see he really is religious. We see that even under his supposed acting he isn't. Henry is the mirror of all Christian kings. He is a great king. He is cutthroat he is calculating he is measured and makes tough seemingly heartless decisions. However he needed to make those decisions. It was tough being a king and you had to be tough. Your first loalty was to your country not your friends. You had to be calculating and measured. All in all Hal the callous mislead youth transformed into a great king the mirror of all Christian kings. ...read more.