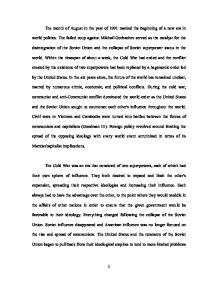 The month of August in the year of 1991 marked the beginning of a new era in world politics.

The month of August in the year of 1991 marked the beginning of a new era in world politics. The failed coup against Mikhail Gorbachev served as the catalyst for the disintegration of the Soviet Union and the collapse of Soviet superpower status in the world. Within the timespan of about a week, the Cold War had ended and the conflict created by the existence of two superpowers had been replaced by a hegemonic order led by the United States. In the six years since, the future of the world has remained unclear, marred by numerous ethnic, economic, and political conflicts. During the cold war, communist and anti-Communist conflict dominated the world order as the United States and the Soviet Union sought to counteract each other's influence throughout the world. Civil wars in Vietnam and Cambodia were turned into battles between the forces of communism and capitalism (Goodman 15). Foreign policy revolved around limiting the spread of the opposing ideology with every world event scrutinized in terms of its Marxist/capitalist implications. The Cold War was an era that consisted of two superpowers, each of which had their own sphere of influence. They both desired to expand and limit the other's expansion, spreading their respective ideologies and increasing their influence. Each always had to have the advantage over the other, to the point where they would meddle in the affairs of other nations in order to ensure that the given government would be favorable to their ideology. Everything changed following the collapse of the Soviet Union. Soviet influence disappeared and American influence was no longer focused on the rise and spread of communism. ...read more.

In 1993, terrorists destroyed the plane carrying the presidents of Rwanda and Burundi, sparking a civil war in both nations that pitted the nations' minority Tutsis against the majority Hutus. In the process, the Hutus massacred nearly a million Tutsis. However, when the Tutsis gained the advantage in the war, nearly two million Hutus fled these countries into neighboring Zaire fearing reprisals. This influx of refugees into Zaire sparked ethnic squabbling there as Zaire's Tutsi population, known as the Banyamulenge, resented the Hutu refugees. The Zairian government, having a history of animosity with regard to the Tutsis, is threatened to revoke the citizenship of all the Banya mulenge in Zaire. A rebel leader in southern Zaire named Laurent Kabila used this disenfranchisement of the Tutsis to his advantage, organizing a rebel army and seizing portions of Zaire. This ethnic uprising soon gained momentum as they marched across the expanse of eastern Zaire, capturing town after town as the unorganized government troops fled. What began as a limited rebellion developed into a nation-wide civil war as other groups joined the movement and Kabila's troops made tremendous military gains. In approximately seven months, the rebels had ousted Zaire's dictator, Mobutu Sese Seko, and had ended his thirty-year rule. Zaire is a nation composed of hundreds of different ethnic groups that has been ruthlessly ruled for thirty years by a self-installed dictator. Through the use of brute force and autocratic government, he has held Zaire together throughout the cold war. However, he has also abused his position by stealing from his country and making himself one of the richest men in the world while his country floundered in economic despair. ...read more.

Many nations fear the intentions of the United States and would resent its intervention in their affairs; however, a world body in which they could make their voices heard would have more legitimacy in world politics. The United States is not solely responsible for the fate of the world. Even though it is, as of right now, the sole superpower, it cannot and must not be the only nation leading the charge into the next century. Nations such as China, Russia, India, Japan, Germany, Britain, France, and other potential powers need to also assume responsibility for the fate of the world. Instead of string their own nation aspirations, placing their own well being among those of their neighbors, they must realize their place in the world and realize that without their cooperation, world development and security will be unstable and arduous. Overall, the next millennium is bringing an era of uncertainty on the world stage. There is no clear and definite order in the realm of international politics, the next several years could bring with them war and instability just as easily as they could bring peace and tranquility. In order to ensure at least a chance of a secure future, several things must happen. The gap between the rich and poor regions of the world needs to be alleviated, as many problems are resulting and could result from the economic situation of many countries. Ethnic tolerance and cooperation is also important in ending and preventing violent nationalistic conflict that could potentially be one of the greatest problems in the coming decades. Above all, a greater effort needs to be made by the United States and other influential nations to take a leading role in forging a future for the world. Without leadership on the world stage, there is anarchy, and in anarchy, violence and civil decay thrives. ...read more.