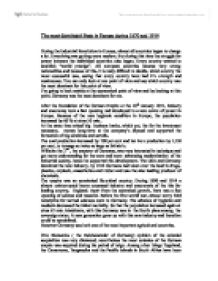 The most dominant State in Europe during 1870 and 1914 During the Industrial Revolution in Europe, almost all countries began to change a lot. Everything was getting more modern. But during this time the struggle for power between the individual countries also began. Every country wanted to establish "world prestige". All european countries became very strong nationalities and because of this, it is realy difficult to decide, which country the most successful was, seeing that every country have had it's strength and weaknesses. You can only look at one point of view and say which country was the most dominant for this point of view. I'm going to look mainly at the economical point of view and by looking at this point, Germany was the most dominant for me. ...read more.

The USA and Germany dominted the new industry, by 1914 Germans had taken over the lead in drugs, plastics, explosiv, anaesthetics and rubber and was the also leading producer of chemicals. The empire was an econimical flourishal country. During 1890 and 1914 a almost uninterrupted boom surpassed industry and enconomie of the this far leading country, England. Apart from the econmical growth, there was a fast upswing of science and research. Before the first world war, almost every third nobelprize for natrual sciences went to Germany. The advance of hygienic and medecin decreased the infant mortality. So that the population increased again at circa 67 mio. inhabitants, with this Germany was in the fourth place among the sovereign states. ...read more.

Also the attempt to move the middle and low income class into a financial engagement in the german colonies failed. The german colonies have been insignificant as a "settlement area". Under the reign of emporor Wilhelm the 2nd the german fleet was extended, which occupation the emperor passionatal practised. The extension of the fleet was another striving for "world prestige". Likewise the german army was taking a consinderable size, the peacetime army felt never below 400 000 troops. The german army became effeceincy as a byword. Conclusion Altoghether looked, Germany was a economical strong and rich country and was more sucessful with it, than a lot of other countries. "Made in Germany" became an respected "trade-mark" The german army was also very strong and powerful. Because of all the above-mentioned points, I think that Germany was the most economical dominant state in europe, during this period. By Judith Hollmann, lower 6th ...read more.