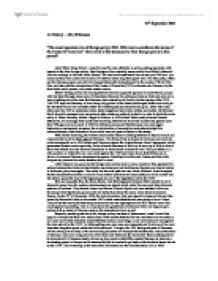 &quot;The most important aim of foreign policy 1933-1936 was to overthrow the terms of the Treaty of Versailles&quot;. How valid is this statement to Nazi foreign policy in this period?

A2 History - Mrs Wilkenson "The most important aim of foreign policy 1933-1936 was to overthrow the terms of the Treaty of Versailles". How valid is this statement to Nazi foreign policy in this period? Adolf Hitler being 'fuhrer' , meant he was the main attributer in policy-making especially with regards to the Nazi foreign policy. Nazi foreign policy originally came mostly from Hitler's ideas and from his writings in his book 'Mein Kampf.' His aims were established from as early as 1920 and you could say they were quite solid in terms of what his actual long-term goals were. The Nazi party, Hitler and the German people were still full of great hatred after being blamed for the events of World War One, and later with the introduction of the Treaty of Versailles (TOV) enforced onto Germany by the three main world powers, only made matters worse. Hitler's foreign policy not only appealed to him but in general appealed to most German people who had been through many years of discontent, they saw his national policies as fresh and new and a way of getting out of the mess that Germany had originally put it self in by the signing of the TOV. ...read more.

This in a way shows the great kind of influence Hitler was beginning to portray both as leader of Germany and on the international level as well. Secondly, another great aim of his foreign policy was that of 'lebensraum', most if not all the people of Europe had their own nations and it was decided that the German race had to be re-united in one main land which ultimately meant that these actions could begin a new war because it was against the rules set out by the TOV. To Hitler getting more land was very important and if not one of his most important long-term goals which had to be achieved. To begin, the TOV took great parts of Germany out and were given to many of the surrounding countries for example the Sudetenland. Many thousands of Germans were now living out side of the Reich and Hitler had the firm belief that something had to be done about it. It became clearly obvious as time went on that Hitler wanted Germany to become a dominating power in Europe and to accomplish this he needed to go back on the territorial terms set out by the TOV. The re-entering of the resourceful Rhineland and the remilitarisation of it in 1936 demonstrated his first actions and little did anyone do to stop him. ...read more.

In 1934, when the non-aggression pact was signed by Poland and Germany, for Hitler this was just to be a temporary treaty as he never had the intention of keeping the relation going as the invasion of 1939 shows. In September 1939, Germany and Russia both invaded Poland that the Western democracies were most keen to protect from the wrath of nazi Germany. This was to prove the final straw for both France and Britain regarding Hitler's expansionist policy, it was during this time that both allies saw him as quite insane, a liar and very untruthful and if something was not to be done then he would later become un-stoppable. Overall, Hitler's foreign policy was beginning to look more like a farce than ever before and something had to be done about it to ensure stability. His beliefs that Germany should be great again and be resourceful is one thing but planning to take over countries which are not his another and was a cause for great concern because Britain and France could no longer manage to appease many other of his desirable actions. When one comes to discuss his foreign policy aims, it not only includes the TOV but also the various other aspects of his other policies in general as well. 30th September 2004 ...read more.