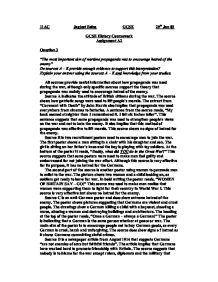 The most important aim of wartime propaganda was to encourage hatred of the enemy&quot;Do sources A - K provide enough evidence to support this interpretation?Explain your answer using the sources A - K and knowledge from your studies.

11AC Jagjeet Bains GCSE 29th Jan 03 GCSE History Coursework Assignment A2 Question 3 "The most important aim of wartime propaganda was to encourage hatred of the enemy" Do sources A - K provide enough evidence to support this interpretation? Explain your answer using the sources A - K and knowledge from your studies. All sources provide useful information about how propaganda was used during the war, although only specific sources support the theory that propaganda was mainly used to encourage hatred of the enemy. Source A indicates the attitude of British citizens during the war. The source shows how patriotic songs were used to lift people's morale. The extract from "Covenant with Death" by John Harris also implies that propaganda was used everywhere from cinemas to factories. A sentence from the source reads, "My back seemed straighter than I remembered it. I felt six inches taller". This sentence suggests that some propaganda was used to strengthen people's views on the war and not to hate the enemy. It also implies that this method of propaganda was effective to lift morale. This source shows no signs of hatred for the enemy. ...read more.

Its aim is to encourage British citizens to eat less food as it was being rationed at the time. It gives a strong message to not waste food. Although the Germans were to blame for the rationing crisis the poster shows no hatred of them. The last source, source K is a selection of media sources such as a wartime film and songs played during and after World War I. The first part of the video shows no hatred for the Germans, but shows how men who did not enlist to the war were treated. It shows a man named Percy Topliss in a British pub. As he did not enlist to the war he is ignored and shouted at by soldiers. The landlord refuses to serve the man at first but when the landlady serves him she puts a white feather in his drink. This was a sign to show that she thought he was a cowardly man. A scene of the war shows the incompetence of officers and the bad conditions in the trenches. A scene of a fight on the front line does show hatred for the Germans as it shows British soldiers being killed. ...read more.

The songs are reliable as they were produced at the time of the war. They may be biased against Germany, as they use humour that gets at the enemy. The propaganda methods used in the sources were put into effect during the war, as songs were sung to strengthen people's attitudes to war. But the most popular form of propaganda were posters. They were used in many places during World War I. Not all of the posters were used to encourage hatred; an example is source B, although posters such as source C were used in hatred campaigns. Some of the events pictured in source C are factual such as the bombing of British cities, which occurred during the war. Many cathedrals and churches were also destroyed, such as Coventry cathedral. In conclusion, I believe that wartime propaganda was used to encourage hatred of the enemy and for other reasons. Although after analysing the sources I believe that propaganda was mainly used for non-hatred reasons. The main issues of war used in propaganda were the role of women, recruitment to the war and rationing. Other evidence, which may have proved otherwise could have been information from an officer, a speech by a government minister or leaflets used for hatred of the enemy. ...read more.