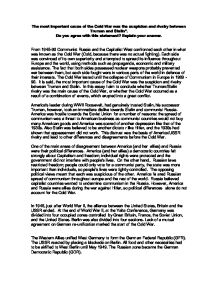 The most important cause of the Cold War was the suspicion and rivalry between Truman and Stalin&quot;. Do you agree with this statement? Explain your answer.

and Russia were their political differences. America (and her allies) a democratic countries felt strongly about Capitalism and freedom; individual rights were protected and the government did not interfere with people's lives. On the other hand, Russian laws restricted freedom; people could only vote for a communist party, the state was more important than individuals, so people's lives were tightly controlled. The opposing political views meant that each was suspicious of the other. America feared Russian spread of communism throughout europe and the rest of the world. Russia believed capitalist countries wanted to undermine communism in the Russia. However, America and Russia were allies during the war against Hitler, so political differences alone do not account for the Cold War. In 1945, just after World War II, the alliance between the United States, Britain and the USSR ended. ...read more.

As Russia drove back Hitler's troops at the end of the war it occupied as much territory as it could in Eastern Europe. The west were worried by what it saw as Russian aggression, and believed that Stalin was trying to spread communism throughout Europe. Although they had been allies in the fight against Hitler, the west were now increasingly suspicious of Russia, another aid in the beginning of the Cold War. As a result of Truman's distrust of Stalin he failed to tell him about the atomic bomb until just before its use on Japan, and refused to allow the Soviet Union to participate in the occupation of Japan. Stalin already believed that the west had delayed the invasion of Europe during the war so that Hitler's armies would weaken the Soviet Union, and this merely increased his suspicion of the west, and his desire to gain control of Eastern Europe. ...read more.