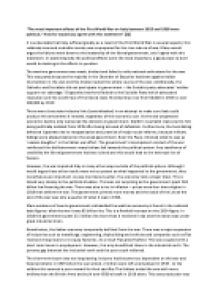 The most important effects of the First World War on Italy between 1915 and 1918 were political. How far would you agree with this statement?

Transfer-Encoding: chunked ﻿?The most important effects of the First World War on Italy between 1915 and 1918 were political.? How far would you agree with this statement? [22] It is undeniable that Italy suffered greatly as a result of the First World War in several aspects; this relatively new and unstable country was unprepared for the true nature of war. Many would argue the failures were down to the leadership of the liberal government, and I agree with this statement. In examining why the political effects were the most important, a good place to start would be looking at the effects in question. The wartime government was weak, divided and failed to rally national enthusiasm for the war. This was partly because the majority in the Chamber of Deputies had been against Italian intervention in the war and this division lasted the whole course of the war. Additionally, the Catholics and Socialists did not participate in government ? the Socialist party advocated ?neither support nor sabotage.? Disgruntled workers flocked to the Socialist Party which advocated revolution and the overthrow of the liberal state. ...read more.

Nonetheless, the Italian economy temporarily befitted from the war. There was a major expansion of industries such as metallurgy, engineering, shipbuilding and vehicles and companies such as Fiat received cheap loans to re-equip factories. As a result Fiat grew fivefold. This was coupled with a short term boom in employment. However, this only benefitted those in the industrial north. The poverty gap between the industrial north and the poor south widened. The short-term boom was not long lasting. Industry had become too dependent on the war and faced problems in 1919 when the war ended. 2 million were left unemployed in 1919 - to the soldiers this seemed a poor reward for their sacrifice The Italians ended the war with more artillery than the British Army and built over 6500 aircraft in 1918 alone. This overproduction was a result of poor planning and only jeopardised the economic situation further. All these economic effects are direct results of the incompetence of the liberal government, further proving that the political effects were the most important. Furthermore, we must also consider the inevitable social effects the war would have. ...read more.

Under him facilities improved and discipline was less arbitrary. 5 million men were conscripted, many of whom were poor farmers and had no military training. This resulted in 1.3 million casualties between 1915 and 1918. The Italians mounted only 11 offensives in two and a half years and their maximum advance was 12 miles. 600,000 Italians killed for these seemingly poor results. However, the Italians did have some success at the Battle of Vittorio Veneto in 1918. By this stage Austria was in political ruin and victory was east. Italy made more territorial gains than any other country. By gaining Trentino, South Tyrol and Istria, nationalist claims for Italia Irredentia were met. Dalmatia, however, was claimed by Yugoslavia. Although these military effects are very important I still assert that the political effects were more impactful and long-lasting for Italy. In conclusion, I definitely agree that the most important effects of the First World War on Italy between 1915 and 1918 were political. This is because politics are central to a country and all other effects ? economic, social and military ? stem from decisions made by the government. If the government is weak it usually follows that the rest of the country will suffer. Perhaps if the government had have been stronger Italy would have emerged from the war a stronger nation. ...read more.