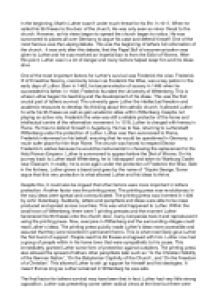 &quot;The most important factor in Martin Luther's survival was Frederick the Wise&quot; discuss

﻿In the beginning, Martin Luther wasn?t under much threat for his life. In 1517, When he nailed his 95 theses to the door of the church, He was only seen as minor threat to the church. However, as his views began to spread the church began to notice. He was summoned to places all over Germany to argue his case and defend himself. One of the most famous was the Leipzig debate. This was the beginning of lathers full reformation of the church. It was only after this debate, that the Papal Bull of excommunication was given to Luther and he was received an imperial ban to from the Edict of Worms. After this point, Luther was in a lot of danger and many factors helped keep him and his ideas alive. One of the most important factors for Luther?s survival was Frederick the wise. Frederick III of Ernestine Saxony, commonly known as Frederick the Wise, was a key patron in the early days of Luther. ...read more.

Luther is summoned to appear before the Diet of Worms. On his journey back to Luther'stadt Wittenberg, he is 'kidnapped' and taken to Wartburg Castle near Eisenach. In reality, he is once again under the protection of Frederick the Wise. Safe in the fortress, Luther grows a beard and goes by the name of "Squire George. Some argue that this very protection is what allowed Luther and his ideas to thrive. Despite this, it could also be Argued that other factors were more important in lathers protection. Another factor was the printing press. The printing press was revolutionary in the way ideas were spread and communicated. The printing press was invented in 1436 by John Gutenberg. Suddenly, letters and pamphlets and ideas were able to be mass produced and spread across countries. This was what happened to Luther. Within the small town of Wittenberg, there were 7 printing presses and the moment Luther hammered his 95 theses onto the church door, many companies took it and reproduced it using the printing press. ...read more.

But due to the beaucracy within the catholic church, no one really confronted Luther or his ideas until it was too late. Many moderate catholics believed that it was time for a compromise between the church and Lutheranism. If the Catholic church had been headed by a pope willing to reform to preserve the unity of the church, even Luther might have been reconciled back into the church. Politically, the opposition to the Luther was focused on Charles V, who became Holy Roman emperor in 1519. The activity of some of Luther?s powerful supporters in Germany threatened Charles?s power there. But he was a cautious and orthodox man and was unwilling to exert his great influence on the side of the moderate Catholics. Instead of seeking a compromise, he decided to fight the Lutherans. The most important factor in the survival of Luther was the printing press. It allowed for the Momentum of Lutheranism to keep snowballing as well as providing a way to make ideas more accessible and assured that they were recorded in permanent forms. This was crucial in the survival of Luther in the early years. ...read more.