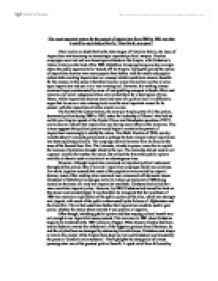 'The most important reason for the pursuit of imperialism from 1880 to 1902 was that it could be exploited politically.' How far do you agree?

'The most important reason for the pursuit of imperialism from 1880 to 1902 was that it could be exploited politically.' How far do you agree? There can be no doubt that by the latter stages of Victorian Britain, the issue of imperialism was becoming an increasingly important political weapon. Election campaigns were lost and won based upon attitudes to the Empire, with Gladstone's Liberal victory on the back of his 1880 Midlothian Campaign being one key example where the public appeared to be 'turned-off' by Empire. During this period the notion of imperialism became even more popular than before, with the media and popular culture both elevating Imperialism as a concept which would have massive benefits for the masses. In this sense it therefore became crucial for political parties to seize upon imperialism and use it as a vote winning tool. However, the working classes remained largely uninterested by news of land grabbing conquest in South Africa and victories over small indigenous tribes only alerted them for a short space of time. Hence, whilst imperialism became more and more of a political tool it is difficult to argue that its use as a vote-winning tactic was the most important reason for its pursuit, with the imperatives of old as crucial as ever. ...read more.

For whilst jingoism ensured that much of the population was excited by imperial dramas, many of the working class remained more concerned with domestic issues. Gladstone's Midlothian Campaigns led to his Liberal government of 1880 being elected on the basis of a very anti-imperialist manifesto. Gladstone had called for a more moralistic imperial policy. However, by 1885 Gladstone had turned his back on this stance and invaded Egypt. It can therefore be transpired that the manifesto of 1880 was merely an exploitation of the public opinion of the time, which was strongly anti-jingoist, with much of the public embarrassed by the failures of Afghanistan and the Zulu War. This in fact underlines further that imperialism could be used to gain power, whether the stance taken towards it was positive or negative. Often though, satisfying public opinion and thus reaping political benefit was not enough to see imperialist issues pursued. This was seen in 1885 when Gladstone began to be troubled by the 1885 invasion of Egypt. When General Gordon had been sent to Sudan to oversee the withdrawal of the Egyptian garrison from Khartoum, he and the city had become besieged by advancing Dervish forces. ...read more.

If tribes could be controlled and anglicized they would need food and clothes from British manufacturers. In this way humanitarian motives were really a veil for further economic expansion. In addition to this the securing of the route to India by the seizure of the Suez Canal in 1885 was inexorably linked to economic motives. India represented the symbolic jewel in the imperialist crown, but in reality served a greater purpose as an economic jewel. Imperialism could definitely serve a political purpose. The success of Disraeli's Conservative governments was proof of this, whilst there can be no doubting that music halls and popular literature of the time were proof of the popularity of the Empire at home. However, the electorate at times was directly opposed to imperialism, as shown by the success of Gladstone's Midlothian Campaigns. Furthermore, the siege of Khartoum in 1885 pointed out that political success was not the most important issue when governments planned their course of action with regards to issues surrounding the Empire. For whilst between 1880 and 1902 the political exploitation emerged as a relatively new way in which Empire could be promoted, the concepts of old, humanitarian, strategic and most importantly economic remained the most vital. ...read more.