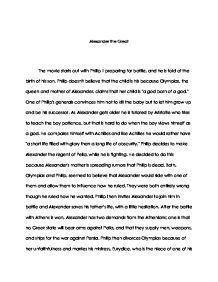 The Movie Alexander the Great

Alexander the Great The movie starts out with Philip II preparing for battle, and he is told of the birth of his son. Philip doesn't believe that the child is his because Olympias, the queen and mother of Alexander, claims that her child is "a god born of a god." One of Philip's generals convinces him not to kill the baby but to let him grow up and be his successor. As Alexander gets older he is tutored by Aristotle who tries to teach the boy patience, but that is hard to do when the boy views himself as a god. He compares himself with Achilles and like Achilles he would rather have "a short life filled with glory than a long life of obscurity." Philip decides to make Alexander the regent of Pella, while he is fighting. He decided to do this because Alexander's mother is spreading rumors that Philip is dead. Both, Olympias and Philip, seemed to believe that Alexander would side with one of them and allow them to influence how he ruled. They were both entirely wrong though he ruled how he wanted. Philip then invites Alexander to join him in battle and Alexander saves his father's life, with a little hesitation. After the battle with Athens is won, Alexander has two demands from the Athenians; one is that no Greek state will bear arms against Pella, and that they supply men, weapons, and ships for the war against Persia. ...read more.

Alexander then orders the men who slaughtered their king to be killed. Then Alexander declares to Athens he wants to be considered a God, because he has gone farther than any man or god by conquering parts of India. His troops become angry with him for disowning his father and proclaiming himself a son of Zeus, and during a drunken fight he kills one of his friends, Cleitus, for speaking his mind. Alexander retreated back to Babylon, after realizing he was wrong, and when he returned he married Darius' daughter Roxane. It ends with him saying he hoped that all the people in his empire could be alike and live alike, and during this speech he collapses on the table. He is then shown dying with his soldiers walking by the place he is laying, and when asked who he leaves his empire to he replies "to the strongest." I believe that Rossen was trying to show Alexander's life in the most accurate possible way, and he did really well. Most of the movie really wasn't about Alexander's conquests in battle but were about his horrible family conflict and how that made him to be the person he was. I think there were many important scenes in this movie, where the soothsayer explains why Alexander can be considered a son of a god, where Philip gets drunk and sings and dances calling himself Philip the barbarian, but I think the most important scene is after Alexander is declared regent. ...read more.

And possibly if they had shown more of Alexander and what people thought of him. I don't know that Rossen really knew what route to take with this movie it is so scattered; the beginning was actually really good. But somewhere in the middle of the movie it seems like he lost interest, which made me lose interest, in what he was doing and just finished it. The end where they are leaving the palace in India and even before that has no sense to it, or I couldn't find any. I don't know if I just got bored but I couldn't make sense of much towards the end. And really, I don't think I learned anything from this movie I didn't already know except, I guess, that Alexander was from a very, very dysfunctional family. I don't think I would recommend this movie, just for the fact it is so hard to follow. But it did have a strength; it did show the dysfunction of his family in a fairly historically accurate way. The biggest flaw is not going into much more detail about Alexander as a King and warrior. I think they show him way too immature and childish, which obviously wasn't the case since he achieved everything he did. It would be awesome if they remade it with the idea Rossen had in mind, or had in mind towards the beginning, but going a lot more in-depth. ...read more.