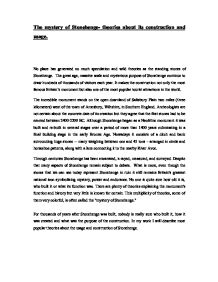 The mystery of Stonehenge- theories about its construction and usage.

The mystery of Stonehenge- theories about its construction and usage. No place has generated so much speculation and wild theories as the standing stones of Stonehenge. The great age, massive scale and mysterious purpose of Stonehenge continue to draw hundreds of thousands of visitors each year. It makes the construction not only the most famous Britain's monument but also one of the most popular tourist attractions in the world. The incredible monument stands on the open downland of Salisbury Plain two miles (three kilometers) west of the town of Amesbury, Wiltshire, in Southern England. Archeologists are not certain about the concrete date of its creation but they agree that the first stones had to be erected between 2400-2200 BC. Although Stonehenge began as a Neolithic monument it was built and re-built in several stages over a period of more than 1400 years culminating in a final building stage in the early Bronze Age. Nowadays it consists of a ditch and bank surrounding huge stones -- many weighing between one and 45 tons - arranged in circle and horseshoe patterns, along with a lane connecting it to the nearby River Avon. ...read more.

During 2nd period dated on around 2500 BC the wooden sanctuary was replaced with two circles of eighty "bluestones" transported from the Prescelly Mountains in Wales, 240 miles away, some weighing as much as four tons. Since the bluestone quarry was so far away, this poses another question: how did the Beaker people, responsible for building the second stage of Stonehenge, transport them to Salisbury Plain? Scientists think they know the answer. The Beaker People first loaded the bluestones onto sledges with wooden runners on the bottom. Then they drug the sledges over a long line of rounded logs. Carried by roller and sledge across land to the headwaters of Milford Haven, they then floated on rafts to what is today Frome in Somerset. From there the Beaker peoples hauled the stones over land to Warminster in Wiltshire. Floating down the River Wylye, they went up the Salisbury Avon to West Arnesbury. From there the workers had only short 2 mile drag to the Stonehenge. In the final stage (2075 BC) the bluestones were taken down and the enormous stones which still stand today were erected. Each weighted as much as 50 tons. ...read more.

Every year a million of tourists make their way to Stonehenge. Although many of original stones have fallen or been removed by previous generations the monument still art act people from all over the world. There is a lot that have to be done to solve the mystery of the stones. After years of the research we are almost certain that the Stonehenge was built in several stages spanning over 1500 years. We know too that it was probably erected by three cultures- Windmill, First Wessex and the Beakers. Archeologists can also predict which tools were used. They have gone same way in answering the 'how', 'what' and 'when' of Stonehenge. But what we don't know is perhaps the most important question of all. They're still some way from a definitive answer to question 'why'. Taking into consideration time and effort involved in building of the construction we can be pretty sure that the Stonehenge was one of the most significant points on the landscape of of late Neolithic Europe and only something very important to ate ancients would have been worth the effort and investment that it took to construct the monument. Perhaps some facts about Stonehenge will never be known but it is mystery that makes the site one of the most popular places in the world that attracts visitors and fascinates them. ...read more.