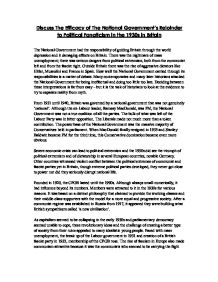 The National Government and Political Extremism

Discuss The Efficacy of The National Government's Rejoinder to Political Fanaticism in the 1930s in Britain The National Government had the responsibility of guiding Britain through the world depression and it damaging effects on Britain. There was the nightmare of mass unemployment; there was serious dangers from political extremism, both from the communist left and from the fascist right. Outside Britain there was the rise of aggressive dictators like Hitler, Mussolini and Franco in Spain. How well the National Government carried through its responsibilities is a matter of debate. Many contemporaries and many later historians attacked the National Government for being ineffectual and doing too little too late. Deciding between these interpretations is far from easy - but it is the task of historians to look at the evidence to try to separate reality from myth. From 1931 until 1940, Britain was governed by a national government that was not genuinely 'national'. Although the ex-Labour leader, Ramsay MacDonald, was PM, the National Government was not a true coalition of all the parties. The bulk of what was left of the Labour Party was in bitter opposition. The Liberals made not much more than a token contribution. The power base of the National Government was the massive majority of Conservatives held in parliament. When MacDonald finally resigned in 1935 and Stanley Baldwin became PM for the third time, this Conservative domination became even more obvious. ...read more.

Mosley played on his ability as an orator. He gave a hundred speeches around the country, published three books and wrote many articles for newspapers and magazines. He was the BUF's biggest asset but also tended to do too much on his own. There were few other talented people in the party. Between 1931-4, the time looked right for a new political movement. There was inevitable disillusionment with the traditional political parties and system. The collapse of the second Labour government, the failure of the National Governments to solve mass unemployment, cuts in government spending and the means test, contrasted with the apparent dynamism of Fascist Italy and Nazi Germany. Mosley's appeal to anti-Semitism won some support in London's East End for example but it was a two-edged sword. For every supporter Mosley gained by exploiting racist attitudes, at least one potential supporter was lost. The BUF won some support in the north by arguing for tariffs to protect the declining textile industry. Some traditional Labour supporters flirted with the BUF because they had become disillusioned with Labour in 1931. There was also some support for the BUF from people who were in favour of better relations with Hitler's Germany because they wanted to avoid a war, or thought Hitler was a valuable defence against the evils of communist. In the end, Mosley and the BUF never seriously challenged political stability in Britain - but for a brief spell it seemed as if he might do so. ...read more.

Unlike German and Russia, the 1914-18 war had not ended in defeat and revolution in Britain. There was no widespread loss of faith in the parliamentary government nor in constitutional monarchy - not even after the Abdication Crisis of 1936. Britain in the late-1930s was not free from social and economic problems but was a stable society, relatively confident about the future. The economic crisis of the early-1930s had been blunted if not completely overcome. Political extremism was making a negligible impact within Britain, even if the international situation was threatening. Foreign observers (inc. Hitler) still saw Britain as a great power, with its empire intact. The great smoother-over of difficult situations, Baldwin, resigned in 1937 but his successor, Chamberlain, was a capable administrator and an impressive politician. Many people (inc. Chamberlain) thought he would make a great PM. In the event, Chamberlain was brought down by his most cherished policy, appeasement. In May 1940, Chamberlain would have to resign in disgrace. There was no hint of this in 1937-8. Appeasement was seen as the logical policy, supported by the bulk of political and public opinion. When Chamberlain made his flying visits to Germany to negotiate with Hitler and then signed the Munich agreement, he gained mass popularity. Only a few voices spoke out against Chamberlain at the time - just as only a few voices gave warnings about Britain's social division; and only a few voices warned that the British Empire was headed for trouble as colonial independence movements developed. ...read more.