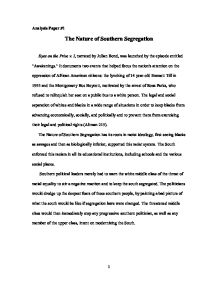 The Nature of Southern Segregation

Analysis Paper #1 The Nature of Southern Segregation Eyes on the Prize v. I, narrated by Julian Bond, was launched by the episode entitled "Awakenings." It documents two events that helped focus the nation's attention on the oppression of African American citizens: the lynching of 14 year-old Emmett Till in 1955 and the Montgomery Bus Boycott, motivated by the arrest of Rosa Parks, who refused to relinquish her seat on a public bus to a white person. The legal and social separation of whites and blacks in a wide range of situations in order to keep blacks from advancing economically, socially, and politically and to prevent them from exercising their legal and political rights (Altman 215). The Nature of Southern Segregation has its roots in racist ideology, first seeing blacks as savages and then as biologically inferior, supported this racist system. The South enforced this racism in all its educational institutions, including schools and the various social places. Southern political leaders merely had to warn the white middle class of the threat of racial equality to stir a negative reaction and to keep the south segregated. ...read more.

Governor George Wallace banned the march, but six hundred people gathered to participate just the same. In what was later called "Bloody Sunday," state troopers, under orders from the governor to stop the marchers, beat and tear-gassed the demonstrators as they marched over the bridge out of Selma. The beatings made national news. Eight days after the Bloody Sunday incident, the president called upon Congress to enact a comprehensive voting rights bill. White Southerners were taken back by these acts. Acts that was happening for years but never seen by a majority of southern whites. The Civil Rights Movement was thrust into Americans households and whites had to look at segregation laws more closely. Those actions on Bloody Sunday were very pivotal in changing southern whites' views about the south and their way of life. Contrasting View of the Vietnam Conflict The Vietcong guerillas and sympathizers of North Vietnam were responsible for the fight against the liberation of the people of their country against the United States in the Vietnam War and yet the villagers suffered the consequences for the actions taken. ...read more.

He played a major role in the war against the French leading him to attending the Geneva Conference in 1954 and becoming prime minister of North Vietnam in 1955. Though both men were instrumental the successes of the Vietnam War, however still they realized that not all tactics taken were wise ones. The sacrifice of human life was too great for the war to have accomplished what seemed to be so little. This brings us to the treatment of the POW's caught during the conflict. It was documented that when the U.S. wanted to obtain information about the guerillas' whereabouts they would get a female sympathizer and wraps wire around the breasts, and attaches it to an electrical shock device to use as a sort of shock treatment to obtain information. The POW's for the U.S. were treated with very little dignity. Everett Alvarez Jr (1964-1973), the first prisoner of war for the U.S. during the conflict, Robinson Risner (1965-1973) another POW that was interviewed. Both spoke of the harsh treatment and ridicule they endured during captivity. Yet no military personal for the U.S. felt the tactics used by them as torture was cruel or unusual. Both prisoners spent at least five years captured for interfering in another countries conflict. ...read more.