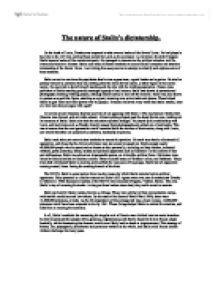 The nature of Stalin's dictatorship.

The nature of Stalin's dictatorship. On the death of Lenin, Trotsky was expected to take over as leader of the Soviet Union. He had played a key role in the civil war, and had been named by Lenin as his successor. As we know, this didn't happen. Stalin became leader of the communist party. He managed to manoeuvre the political situation until he eventually became a dictator. Stalin used many different methods to secure himself complete and absolute dictatorship of the Soviet Union. I am writing this essay answer to attempt to identify and explore some of these methods. Stalin set out to convince the population that he was a great man, a good leader and a genius. ...read more.

Books from libraries were burned, and art works altered. Almost nothing slipped past the sharp Soviet eyes, looking out for enemies of Stalin. Stalin also had the education syllabus changed. He played up his relationship with Lenin, and had rivals such as Trotsky literally erased from photographs and edited out of text books. This was to ensure that the next generation would consider Stalin the saviour of their nation, along with Lenin, and would therefore not question his authority, leadership or policies. Stalin used other yet more sinister methods to cement his position. He made sure that he eliminated all opposition, and those that he did not eliminate were too scared to speak out. ...read more.

Stalin ran horrific labour camps, known as Gulags. These were similar to Nazi concentration camps, with terrible conditions and low rations. By the start of the Second World War (1939), there were 12,000,000 prisoners, or zeks. As the life expectancy of the average zek was a mere 2 years, 12,000,000 prisoners would have been expected to die by 1941. These Gulags helped Stalin to control his enemies, and aided him in running the economy. In all, Stalin's methods for cementing his singular rule of Russia were divided into two main branches: he tried to persuade the people of his greatness, righteousness and that he deserved to rule Russia single headedly, whilst threatening that descent would most likely lead to death or imprisonment. This strategy of threats, lies, propaganda, punishment and promises worked on the whole, and Stalin ruled Russia almost without challenge for many years. ...read more.