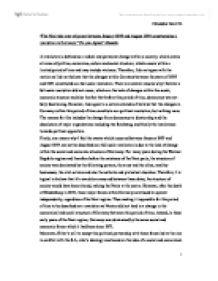 The Nazi take over of power between 1933 and 1934 constituted as a revolution.

"The Nazi take over of power between January 1933 and August 1934 constituted as a revolution in Germany." Do you Agree? 24marks A revolution is defined as a radical and pervasive change within a country, which covers all areas of politics, economics, culture and social structure, which occurs within a limited period of time and may include violence. Therefore, I do not agree with the motion as I do not believe that the changes within Germany between the years of 1933 and 1934 constituted as a full-scale revolution. There are several reasons why I believe a full-scale revolution did not occur, which are the lack of changes within the social, economic structure and also the fact that before this period of time, democracy was not fully functioning. However, I do agree to a certain extend as I believe that the changes in Germany within this period of time constitute as a political revolution, but nothing more. The reasons for this includes the change from democracy to dictatorship and the dissolution of major organisations including the Reichstag, and finally the intolerance towards political opposition. ...read more.

According to the definition previously stated, In order for this period of time to be regarded as a revolution, a radical political change has to occur. However, since the start of the great depression in Germany 1929, it had been made clear that the Weimar Republic, and the democratic ideology it carried, were weak and unstable. By the early 1930's, the democratic government had seized to function effectively and as a result of this, the German people desired a stronger government (and even to a certain extent expected it) in order to resolve the problems the democratic government had left behind. So therefore, there was nothing substantial about the contrast between Nazism and the previous form of government as the Weimar Republic was not a strong democratic government, instead it was a failed government which no longer functioning within Germany, therefore weakening the argument for the fact that between 1933 and 1934 was a revolution. However, although I believe that the changes between these dates does not constitute as a full-scale revolution in Germany, I believe that it may be classed as a political revolution. ...read more.

In addition, the communist party had already been efficiently suppressed as a result of the Reichstag fire in 1933. Therefore, between the years of 1933 and 1934, a further reason why this period of time can be regarded as a political revolution is due to how Hitler efficiently dealt with all of the Nazi's political opposition. To Conclude, I disagree with the statement "The Nazi take over of power between January 1933 and August 1934 constituted as a revolution in Germany" based on the grounds that there was no change within the social and economic structure of Germany, and also because of the lack of strength the previous democratic government had, therefore making the change to Nazism less severe. However, I do feel that the occurrences within the dates of January 1933 and August 1934 constitute as a Political revolution due to the results of the change from a democracy to a dictatorship, the dissolution of major organisations (including the Reichstag) and finally because of the elimination of all other political forces in Germany. ?? ?? ?? ?? Christopher Gale CDL ...read more.