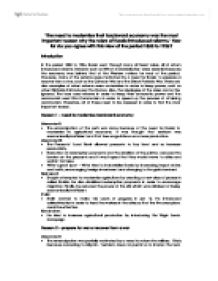 'The need to modernise their backward economy was the most important reason why the rulers of Russia introduced reforms.' How far do you agree with this view of the period 1855 to 1956?

'The need to modernise their backward economy was the most important reason why the rulers of Russia introduced reforms.' How far do you agree with this view of the period 1855 to 1956? Introduction In the period 1855 to 1956, Russia went through many different rulers, all of whom introduced reforms. Reforms such as Witte's industrialisation were essential because the economy was behind that of the Western nations for most of the period. However, many of the reforms were motivated by a need for Russia to prepare or recover from a war, such as the Crimean War and the Great Patriotic War. There are also examples of when reforms were undertaken in order to keep power, such as when Nicholas II introduced the Dumas. Also, the ideologies of the rulers cannot be ignored. The tsars used reforms in order to keep their autocratic power and the communists used War Communism in order to speed up the process of attaining communism. Therefore, all of these need to be assessed in order to find the most important reason. ...read more.

Khrushchev: * He tried to increase agricultural production by introducing the Virgin Lands Campaign. Reason 2 - prepare for war or recover from a war Alexander II: * The emancipation was partially motivated by a need to reform the military. This is because according to Milyutin, "serfdom does not permit us to shorten the term of service nor to increase the number of those indefinite leave so as to reduce the number of troops on hand". * He also introduced military reforms to decrease the corruption of the officers. This shows that for Alexander II, recovering from the loss of the Crimean war was important to him. Alexander III: * Witte focused on building railways such as the trans-Siberian railway which would help Russia to expand in the East. * No wars happened in his reign so war was not an important factor for Alexander III. Lenin: * War communism can be seen as a means of winning the civil war because the Reds were able to feed their army. ...read more.

Alexander III: * He was a true autocrat who did not believe in his father's liberal ideas. His counter reforms can be seen as a response to the reforms of Alexander II. Lenin: * War communism aimed to create a communist state before going through the other stages as proposed by Marx. Lenin believed that war communism was a means to achieving true communism. * The NEP can be seen as a shift in Lenin's ideology. Conclusion Ultimately, the rulers of Russia in the period 1855 to 1956 introduced reforms for many reasons. There is no doubt that some of the reforms were made because of their personal beliefs but this cannot be seen as the main reason. Most of the rulers used repression more effectively in keeping power than reforms. Although all the rulers recognised that the economy was behind that of the Western nations, it seems that they never prioritised it. Agricultural reforms were always implemented in order to industrialise the country. However, for many of the rulers, industrialisation was used to make Russia stronger and the best way this could be achieved was through war. Therefore, the need to prepare for war was the most important reason for introducing reforms. ?? ?? ?? ?? ...read more.