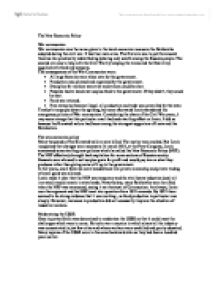 The New Economic Policy War communism War communism was the name given to the harsh economic measures the Bolsheviks adopted during the civil war. It had two main aims. The first aim was to put Communist theories into practice by redistributing (sharing out) wealth among the Russian people. The second aim was to help with the Civil War by keeping the towns and the Red Army supplied with food and weapons. The consequences of the War Communism were: * All large factories were taken over by the government. * Production was planned and organized by the government. * Discipline for workers was strict and strikers could be shot. * Peasants had to hand over surplus food to the government. If they didn't, they could be shot. * Food was rationed. * Free enterprise became illegal- all production and trade was controlled by the state. ...read more.

would remain in state hands. Nevertheless, many Bolsheviks were horrified when the NEP was announced, seeing it as a betrayal of Communism. As always, Lenin won the argument and the NEP went into operation from 1921 onwards. By 1925 there seemed to be strong evidence that it was working , as food production in particular rose steeply. However, increases in production did not necessarily improve the situation of industrial workers. Modernising the USSR Once in power Stalin was determined to modernise the USSR so that it could meet the challenges which were to come. He took over a country in which almost all the industry was concentrated in just few cities and whose workers were unskilled and poorly educated. Many regions of the USSR were in the same backward state as they had been a hundred years earlier. Industry and the Five-Years Plans Stalin ended Lenin's NEP and set about achieving modernization through a series of Five-Year plans. ...read more.

Foreign observers marvelled as huge new steel mills appeared at Magnitogorsk in the Urals and Sverdlovsk in central Siberia. New damns and hydroelectric power fed industry's energy requirements. Russian experts flooded into the Muslim republics of central Asia such as Uzbekistan and Kazakhstan, creating industry from scratch in previously undeveloped areas. The second Five Year plan (1933-37) built on the achievements of the first. Heavy industry was still a priority, but other areas were also developed. Mining for lead , tin, zinc and other minerals intensified as Stalin further exploited Siberia's rich mineral resources. Transport and communications were also boosted, and the new railways and canal were built. The most spectacular showpiece project was the Moscow underground railway. Stalin also wanted industrialisation to help improve Russia's agriculture. The production of tractors and other farm machinery increased dramatically. In the third Five-Year plan, which was begun in 1938, some factories were to switch to the production of consumer goods. However this plan was disrupted by the Second World War. ...read more.