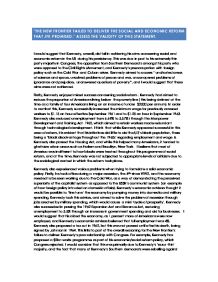 &quot;The New Frontier failed to deliver the social and economic reform that Kennedy promised&quot;. Assess the validity of the statement.

"THE NEW FRONTIER FAILED TO DELIVER THE SOCIAL AND ECONOMIC REFORM THAT JFK PROMISED." ASSESS THE VALIDITY OF THIS STATEMENT. I would suggest that Kennedy, overall, did fail in achieving his aims concerning social and economic reform in the US during his presidency. This was due in part to his extremely thin party majority in Congress, the opposition from Southern Democrats amongst his party who were opposed to the Civil Rights Movement, and Kennedy's preoccupation with foreign policy such as the Cold War and Cuban crises. Kennedy aimed to access "uncharted areas of science and space, unsolved problems of peace and war, unconquered problems of ignorance and prejudice, unanswered questions of poverty", and I would suggest that these aims were not achieved. Firstly, Kennedy enjoyed mixed success concerning social reform. Kennedy had aimed to reduce the proportion of Americans living below the poverty line (this being defined at the time as a family of four Americans living on an income of under $3000 per annum). ...read more.

demonstrating the perceived superiority of the capitalist system as opposed to the USSR's communist system (an example of how foreign policy intruded on domestic affairs). Kennedy's economic advisors thought it would be possible to 'fine tune' the economy by pumping money into domestic and military spending. Kennedy took this advice, and aimed to solve the problem of recession through jobs created by military spending, which would cause a mini 'cycle of prosperity'. Kennedy also succeeded in passing the 1962 Expansion Act and Revenue Act, reducing unemployment to 5.5% through an increase in government spending and aid for businesses. I would suggest that his aided the economy, as 1 percent more of Americans were now employed, and Kennedy's economic advisors believed that full employment was 4%. Kennedy also proposed a tax cut in 1962, but this was not passed until after his death, being signed by Johnson in 1964. This links to part of the overall reasoning for the New Frontier's failure to deliver: Kennedy's poor relationship with Congress. ...read more.

Kennedy dispatched federal troops and the Alabama National Guard to the University of Alabama, where Governor George Wallace was attempting to stop two African American students from entering. I think that this is an example of Kennedy's strong belief in Civil Rights, and even though Kennedy was assassinated on 22 November 1963, he succeeded in his aims of allowing every black American "the equal right to develop their talent and their ability and their motivation, to make something of themselves". Overall, I believe that Kennedy's New Frontier failed to achieve its aims, which were to improve socioeconomic conditions for as many Americans as possible. Kennedy failed because of his lack of congressional support as well as his failure to aid black Americans in an economic sense. In the long term, however, I think it is possible that Kennedy, in fact, succeeded. For example, while Kennedy's tax cut proposal initially failed, it came through shortly after his death when passed by Lyndon B. Johnson. i U.S Department of Labor ii American Sociological Review ?? ?? ?? ?? ...read more.