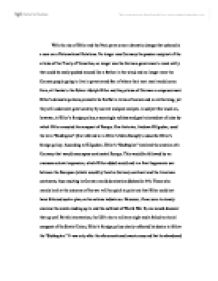 The New Germany Under Hitler

With the rise of Hitler and the Nazi party came a dramatic change that ushered in a new era of International Relations. No longer was Germany the passive recipient of the articles of the Treaty of Versailles, no longer was the German government a weak entity that could be easily pushed around like a feather in the wind, and no longer were the German people going to live in poverty and fear of where their next meal would come from, all thanks to the Fuhrer Adolph Hitler and his policies of German re-empowerment. Hitler's domestic policies proved to be fruitful in terms of morale and re-militarizing, yet they still underwent great scrutiny by current and past analysts. A subject few touch on, however, is Hitler's foreign policy, a seemingly ruthless and goal-oriented set of rules by which Hitler executed his conquest of Europe. One historian, Andreas Hillgruber, used the term "Stufenplan" (first referred to in Hitler's Mein Kampf) to describe Hitler's foreign policy. According to Hillgruber, Hitler's "Stufenplan" involved the creation of a Germany that would encompass continental Europe. This would be followed by an overseas colonial expansion, which Hitler added would end in a final hegemonic war between the European (which would by then be German) ...read more.

He went on to attempt to strike a deal with Great Britain, whom he viewed as a lesser power, in which he would guarantee the British safety in its colonial endeavors in return for German supremacy in continental Europe. Great Britain, he assumed, would jump at such an opportunity, as Hitler would guarantee it safe expansion overseas. Also, Hitler believed that Great Britain's opposition to France on the question of Upper Silesia and the Ruhr crisis almost guaranteed him British cooperation (Schweller 108). He also sought alliances with Italy, whom he believed was destined to ally with Germany due to its desire to undo the doings of the Treaty of Versailles as well as to topple France (Schweller 109). Outside of Europe, Hitler looked to Japan as an ally because it also opposed Communism in the Soviet Union and because its desire for territorial acquisition was in the Pacific and would not interfere with his Lebenschraum (Schweller 111). This grandiose plan of alliances was shattered when Britain rejected Hitler's terms, which involved limiting France, Poland and Czechoslovakia's armaments but not that of Germany or Britain (Schweller 112). The British foreign secretary Austen Chamberlain did not want to lose any form of alliance with France, whom he saw as the as Britain's chief ally. ...read more.

Hitler's policy of reacting to the events as they occurred had failed him, as did his prized "Stufenplan." One, however, must wonder what it would be like had Hitler been victorious in his "Stufenplan." Would Germany be the leading superpower in today's world? Hitler was quoted as saying that: ...with the defeat of the Reich...there will remain in the world only two Great Powers capable of confronting each other - the United States and Soviet Russia. The laws of both history and geography will compel these two powers to a trial of strength, either military or in the field of economics and ideology. These same laws will make it inevitable that both powers shall become enemies of Europe. And it is equally certain that both these powers will sooner or later find it desirable to seek the support of the sole surviving nation in Europe, the German people. I say with all emphasis at my command that the Germans must at all costs avoid playing the role of the pawn in either camp (Schweller 182). One must admit that some of Hitler's above prophecies eerily came to be. If so, then who is to say that the rest of them could not have? One can only wonder. ?? ?? ?? ?? ...read more.