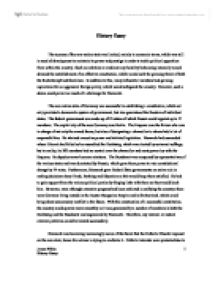 The new nation state of Germany was successful in establishing a constitution, which not only provided a democratic system of government, but also guaranteed the freedom of individual states.

History Essay The success of the new nation state was limited, mainly in economic terms, which was still in need of development to maintain its power and prestige in order to tackle political opposition from within the country. Such an ambition to eradicate any hostility harbouring internally would demand the establishment of an effective constitution, which would curb the growing threat of both the Kulterkampf and Socialism. In addition to this, many influential members had growing aspirations for an aggressive foreign policy, which would safeguard the country. However, such a desire could prove too much of a challenge for Bismarck. The new nation state of Germany was successful in establishing a constitution, which not only provided a democratic system of government, but also guaranteed the freedom of individual states. The federal government was made up of 25 states of which Prussia could appoint up to 17 members. The capital city of the new Germany was Berlin. The Emperor was the Kaiser who was in charge of not only the armed forces, but also of designating a chancellor to whom held a lot of responsibilities. He attained executive power and initiated legislation. Bismarck had succeeded where Liberals had failed as he assembled the Reichstag, which was elected by universal suffrage, but in reality, its 382 members had no control over the chancellor and most power lay with the Emperor. ...read more.

Due to Universal Suffrage in the German Empire in 1871, it enabled the Socialists to speak out in favour of the urban workers, which increased in support. They had won 12 seats by 1877. Nevertheless, Bismarck used two assassination attempts on the Emperor in 1878 to obtain anti-Socialist legislation, but the National Liberals refused to support it. In 1879, the Reichstag passed a law, taking away the right of Socialist or Communist organisations to hold meetings or publish materials. Those who were found to be supporting Socialist ideals were imprisoned and others emigrated, but Socialism was merely driven underground. Meetings continued to be held, disguised as other organisations or in places, which it was difficult for the Police to find. Printed materials and newspapers were smuggled in from abroad. The Socialist 'menace' couldn't be stopped so Bismarck took it a step further. He established a program of 'State Socialism' to gain the working class support in defence of Socialism. In May 1883, a sickness insurance law was introduced, whereby; employees contributed two-thirds of the cost and employers the other one-third. Following this, in June 1884, an Accident Insurance Law, funded by employers, was passed, which helped nearly all wage earning groups. ...read more.

The new state was successful as influential interests were addressed, but due to the increased interest in Foreign Policy from both Bismarck and the Kaiser, alarm bells were ringing out in the ears of the central powers, as they became worried at Germanys actions and remained cautious. Tension was building, which could accumulate to European relations arising into future conflict. From the years of 1871-1914, Germany came under widespread development under the authority of Otto Von Bismarck, the architect of Nationalism, who engineered its potential to the full. He re-founded the Second Reich by making many decisive changes in the interests of the new nation state, which also included solving many political problems. To his disappointment however, he was unable to vanquish the many threats that arose during his period in government as it became too much of a struggle for him. These threats varied, but due to the establishment of an effective constitution he was able to seek a compromise with the Catholic Church and the Socialists that would provide him with more energy and metabolism to concentrate on foreign Policy. It would therefore seem that Bismarck adopted Political Problems very seriously, but due to the new Emperor, Kaiser William II, Germany's hopes and desires for European peace, was slowly diminishing. 1 James White History Essay ...read more.