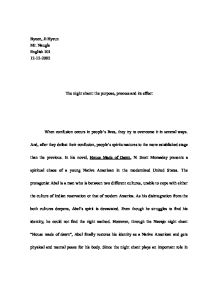 The night chant: the purpose, process and its effect.

Byeon, Ji Hyeun Mr. Naugle English 101 12-12-2002 The night chant: the purpose, process and its effect When confusion occurs in people's lives, they try to overcome it in several ways. And, after they defeat their confusion, people's spirits matures to the more established stage than the previous. In his novel, House Made of Dawn, N. Scott Momaday presents a spiritual chaos of a young Native American in the modernized United States. The protagonist Abel is a man who is between two different cultures, unable to cope with either the culture of Indian reservation or that of modern America. As his disintegration from the both cultures deepens, Abel's spirit is devastated. Even though he struggles to find his identity, he could not find the right method. However, through the Navajo night chant "House made of dawn", Abel finally restores his identity as a Native American and gets physical and mental peace for his body. Since the night chant plays an important role in Abel's life, it is necessary to know about the song for the profound understanding of this novel. This paper will pinpoint three facts: First, the purpose of the night chant, second, its healing process, and finally the effect of the night chant on Abel's life. The night chant is a complex ceremony designed for healing patient who are out of balance with the world. ...read more.