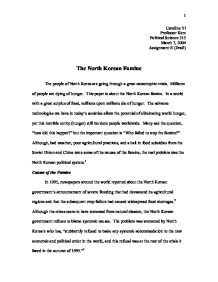 Caroline Yi Professor Kent Political Science 315 March 7, 2004 Assignment E (Draft) The North Korean Famine The people of North Korea are going through a great catastrophic crisis. Millions of people are dying of hunger. This paper is about the North Korean famine. In a world with a great surplus of food, millions upon millions die of hunger. The advance technologies we have in today's societies allow the potential of eliminating world hunger, yet this horrible entity (hunger) still burdens people worldwide. Many ask the question, "how did this happen?" but the important question is "Who failed to stop the famine?" Although, bad weather, poor agricultural practices, and a halt in food subsidies from the Soviet Union and China were some of the causes of the famine, the real problem was the North Korean political system.1 Causes of the Famine In 1995, newspapers around the world reported about ...read more.

The governing philosophy of juche is, "a neo-Confucian permutation of Marxism demanding radical self-sufficiency."6 North Korea was known to be the "Hermit Kingdom," it did not want to ask for help from the outside world at the time in 1994. The North Korean country has no outlet for people to speak out. There is no democratic system in North Korea, where a free press could forewarn an impending disaster.7 North Korea depended heavily on Soviet and Chinese subsidies. A tight form of trade between North Korea, Soviet Union, and the Chinese government helped the communist economy. In the 1980s, North Korean food production started to decline very sharply and Soviet and Chinese subsidies made up for the deficits.8 The dependency of the Soviet and Chinese oil for the lack of the North Korean petroleum resources had a double harsh impact on the country. ...read more.