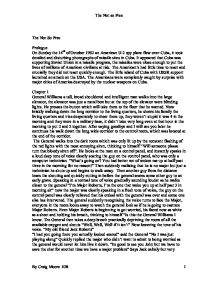 The Not So Free.

The Not So Free Prologue On Sunday the 14th of October 1962 an American U-2 spy plane flew over Cuba, it took detailed and disturbing photographs of missile sites in Cuba. It appeared that Cuba was supporting Soviet Union in a missile program, the missiles were close enough to put the lives of millions of American civilians at risk. The American's had little time to react and crucially they did not react quickly enough. The little island of Cuba with USSR support launched an attack on the USA. The Americans were completely caught by surprise with major cities of America destroyed by the nuclear weapons on Cuba. Chapter 1 General Williams a tall, broad shouldered and intelligent man walks into the large elevator, the elevator was just a metal box but at the top of the elevator were blinding lights. He presses the button which will take them to the floor that he wanted. Now briskly walking down the long corridor to the living quarters, he shows his family the living quarters and tries desperately to cheer them up, they weren't stupid it was 4 in the morning and they were in a military base, it didn't take very long even at that hour in the morning to put 2 and 2 together. After saying goodbye and I will see you later he continues his walk down the long wide corridor to the control room, which was located at the end of the corridor. The General walks into the dark room which was only lit up by the constant flashing of the red lights with the most annoying siren, thinking to himself "Will someone please turn that bloody siren off". He looks at the man on a control panel, and instantly speaks in a loud deep tone of voice clearly scaring the guy on the control panel, who was only a computer technician. ...read more.

He then has a conversation with the guy on the other end of the phone. "Yes comrade Leonid Brezhnev, they intend to launch nuclear missiles on the major cities, Okay I understand that you have to rush off now, the information I have provided you has brought some need for urgent attention" The line went dead. Yury then got up and walked out of the building telling his guard he was leaving, handed him a set of keys and walked off over the same footprints the guy left on the floor when he walked to his last meeting, He was pleased with the mans death, you could see it on his face, his expression a sadistic kind of smile. . Chapter 4 The outside of Westminster again was a gloomy site due to the downpour of heavy rain. A man of about 5ft 10 slim build with a distinctive bold patch in the middle of his head was staring out the window. Although no one actually knows how his bold patch got there, as he has apparently had it since he was about 15. Some people say he was playing with fire when he was younger. He was called Field Marshall Clark, a voice from the far corner quite deep and worried which sounded like a man who wanted just to get straight to the point, none of this messing around. He was the Prime Minister Mr. Macmillan who said "At least we are agreed on one thing, we have decided the public haven't got the knowledge to decide, the only problem is you want to go to war, I don't" Yes but sir we need to support the victim, it is our duty, America has had an act of war commited against them" shouts the Field Marshall with anger and determination to get his point across. "They have enough nuclear warheads to destroy the world several times, what would that do to England?" ...read more.

The American Generals in Atlanta knew they could not hold on any longer especially now they were on minimum rations and Atlanta was about to fall, they could not survive the Russian attack and no help was arriving from their allies which they had hoped might arrive. So they ask for a peace treaty that would hand over there weaponry and surrender. The Russians agreed to this and so the Americans surrendered. The great free country was not so free any more. All the Generals were arrested from the command station and sent to Prisoner of war camps. As for the president he went into exile just before the finally assault, he now lives in Ireland with his family. On August the 22nd 1966, The Russian leader Nikita Khrushchev delivered his message in 6 different languages across the globe " The only world power, the Soviet Union has fought hard and lost many men but we have captured the last city of America and we now rule America" On the same day the British P.M walked into the houses of parliament stood up and in his opening speech delivered this message to the British people "I feel this country made the correct choice to stay out of the war which America and Russia were part, of however I speak on behalf of everyone, we are deeply sorry that America fell and that so many people lost there lives, I can assure you we shall try and avoid war but if by the most unfortunate events war is declared we shall fight together and hard and we shall remain a free country." In 1970 Russia still has never declared war on anyone else but still has control over America. However America is beginning to fight for independence just like they did against the British, but they do not know whether they will succeed or not, the fate of America again is in play. ?? ?? ?? ?? The Not so Free 1 By Craig Moore 10B ...read more.