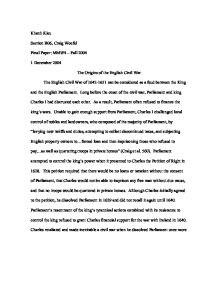 The Origins of the English Civil War

Khanh Kieu Section B06, Craig Woefel Final Paper: MMW4 - Fall 2004 1 December 2004 The Origins of the English Civil War The English Civil War of 1642-1651 can be considered as a feud between the King and the English Parliament. Long before the onset of the civil war, Parliament and king Charles I had distrusted each other. As a result, Parliament often refused to finance the king's wars. Unable to gain enough support from Parliament, Charles I challenged local control of nobles and landowners, who composed of the majority of Parliament, by "levying new tariffs and duties, attempting to collect discontinued taxes, and subjecting English property owners to...forced loan and then imprisoning those who refused to pay...as well as quartering troops in private homes" (Craig et al. 560). Parliament attempted to control the king's power when it presented to Charles the Petition of Right in 1628. This petition required that there would be no loans or taxation without the consent of Parliament, that Charles would not be able to imprison any free man without due cause, and that no troops would be quartered in private homes. ...read more.

Among other scholars such as John Locke, Thomas Babington Macaulay was committed to the Whig position. According to Macaulay, "James I and [his son] Charles I were far more extreme and outspoken in their claims than Elizabeth had been" (Taylor vii). Furthermore, Charles I had attempted to make himself the first despot by reducing Parliament to a nullity (Macaulay 64). It should be noted that during the time of Charles I, the king had no standing army, and that the king could not legally raise money without the consent of Parliament (Taylor 3, 4). However, because Charles had always been in favor of the notion of absolute monarchy (Taylor viii), he had dared to make extraparliamentary actions without the consent of Parliament. These included the trespass onto the constitutional rights of the English people, levying taxes without the consent of Parliament, imprisoning civilians and court nobles alike without due cause, and quartering troops in private homes during times of war (Macaulay 63-64). All these actions challenged local control of nobles and landowners (Craig et al. 560). ...read more.