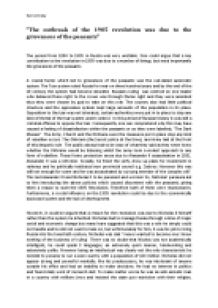 ﻿Keir Armsby ?The outbreak of the 1905 revolution was due to the grievances of the peasants? The period from 1894 to 1905 in Russia was very unstable. One could argue that a key contribution to the revolution in 1905 was due to a number of things, but most importantly the grievances of the peasants. A crucial factor which led to grievances of the peasants was the out-dated autocratic system. The Tsar system ruled Russia for near on three hundred years and by the end of the 19 century the system had become obsolete. Russians ruling was centred on one leader who believed there right to the crown was through Divine right and they were anointed thus they were chosen by god to take on this role. The country also had little political structure and the oppressive system kept large amounts of the population in its place. Opposition to the tsar was not tolerated; certain authorities were put in to place to stop any kind of threat of the tsar system under control. In this period of Russian history it was still a criminal offense to oppose the tsar. Consequently one can comprehend why this may have caused a feeling of dissatisfaction within the peasants or as they were labelled; ?The Dark Masses? .The Army, Church and the Okhrana were the measures put in place stop any kind of rebellion occurs. ...read more.

Similarly Sergei Witte, minister of finance and chief minister had a very large imprint on Nicholas and Russia. Unlike Pobedonostsev Witte wanted change and tried to economically reform Russia. Witte invited foreign expert in to Russia to advice on industrial planning. Later he got substantial loans and investment from abroad and pumped the funds in to modernising Russia economy. One of his many achievements was the Trans-Siberian railways, this encouraged migration of worker, boosted exports and foreign trade. Despite this Wittes projects came at price. To pay for his modernisation, Witte did you things which made him unpopular with the peasants. He first heavily taxed the peasants, and because Russia could no longer afford to keep many workers unemployment rose significantly. He also depended too much on foreign loan which was only going to hurt the next generation. Wittes reforms led to many strikes and additional hatred toward the tsarist system. Therefore Wittes successes cause drawbacks for those who were most venerable leading to strike and protest and a on going downhill spiral, the redemption payments and taxes only deteriorated with the bad harvest in 1900 crippling the peasants and causing mass starvation thus giving them a reason to revolt. In addition, too Russia?s already burgeoning problems, the foreign policy the Nicholas II inherited was flawed because of the size of the Russian empire. In 1904 Russia clashed with it far eastern neighbour, Japan. ...read more.

Bloody Sunday was the trigger cause for the 1905 revolution. On the 22nd January Father Gapon, an orthodox priest, attempted to lead a peaceful march of workers and their families to Winter Palace in St Petersburg. The intension of the march were simply present a petition to Nicholas in hope he would use his royal authority to relieve peasants of their desperate conditions. However the march did not go as pleased and instead the march instigated panic in to the police forces in the capital. The marches were fired on and charged by cavalry. Opponents of the tsar claim that the massacre was deliberate despite Nicolas II supposed absent. This instant gravely damaged the tsar image of a ?little father? of Russia. The hundreds dead immediately instigated a wide spread reaction; strikes occurred in major towns and cities and Terrorism against government official and landowner arose. Essentially this protest was sparked off by the grievances of the peasants as they were the group of marcher who originally went to St Petersburg. In conclusion, Russia in the late nineteenth century and early twentieth century was extremely unjust for those who were peasant or of a national minority. The lack of political reform angered most of society and Peasants lived in great grievances due poor working and living condition. This was the most important factor which led to the reform. However In hindsight the autocratic system was out of date and Nicholas incompetence to make changes and other factors added to the anger of the peasants. ...read more.