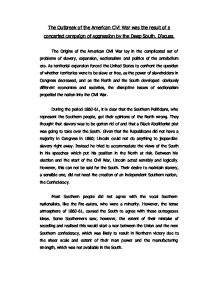 The Outbreak of the American Civil War was the result of a concerted campaign of aggression by the Deep South. Discuss.

The Outbreak of the American Civil War was the result of a concerted campaign of aggression by the Deep South. Discuss. The Origins of the American Civil War lay in the complicated set of problems of slavery, expansion, sectionalism and politics of the antebellum era. As territorial expansion forced the United States to confront the question of whether territories were to be slave or free, as the power of slaveholders in Congress decreased, and as the North and the South developed obviously different economies and societies, the disruptive issues of sectionalism propelled the nation into the Civil War. During the period 1860-61, it is clear that the Southern Politicians, who represent the Southern people, got their opinions of the North wrong. They thought that slavery was to be gotten rid of and that a Black Abolitionist plot was going to take over the South. Given that the Republicans did not have a majority in Congress in 1860; Lincoln could not do anything to jeopardize slavery right away. Instead he tried to accommodate the views of the South in his speeches which put his position in the North at risk. Between his election and the start of the Civil War, Lincoln acted sensibly and logically. ...read more.

As the nation grew in size, so did the opportunities for expansion westward. Many felt that slavery should be allowed in the new territories such as Kansas and Missouri, while others were set against it. A radical abolitionist from Kansas named John Brown rose to fame in his hometown by killing five pro-slavers at Pottawotomie. On the night of May 24, 1856, John Brown and his company of Free State volunteers murdered five men settled along the Pottawotomie Creek in south-eastern Kansas. The victims were prominently associated with the pro-slavery Law and Order Party, but were not themselves slave owners. The Pottawotomie killings caused south-eastern Kansas to end up in guerrilla warfare. Raiders from Missouri terrorised the Free Soilers, while travelling gangs of Free State volunteers imposed similar violence upon their pro-slavery neighbours. While neither John Brown nor any members of his company were arrested for their participation at Pottawotomie, his two eldest sons were seized by mobs and nearly lynched. Most of the books written by members of the abolitionist community in the years after Brown's own execution in 1859, downgraded this blemish on the otherwise rich career of their holy warrior. James Redpath, the first in a long line of biographers who 'martyred' Brown, criticises the whole episode as a pro-slavery conspiracy to criticise both Brown and his cause. ...read more.

This pushed the preciously sceptical Southerners into starting to believe the once paranoid speeches they had heard form extremists, the fire-eaters. In conclusion, I do not think that the outbreak of the civil war can be wholly placed on the shoulders of the Deep South, as they were not the only ones who were aggressive towards the other. They did have a large part however, in the break down of communication between North and South as they were not ready to compromise and were not willing to show the whole picture to the Southern people, when they had control over the South, such as through the media. Journalists such as the Rhett family owned and edited their own newspaper, the 'Charleston Mercenary', by having this they were able to decide what went into the paper, what stayed out and how everything was written. They were able to mould the South to their way of thinking. However, Northerners, such as John Brown and his 'army' were also to blame; they caused a substantial amount of damage by being aggressive towards the South and their views on slavery. Problems with slavery, particularly slavery expansion, led ultimately to the Civil War. Had the South acted rationally in 1860, there need not have been a war; however, it is difficult to see how war could have been prevented. ...read more.