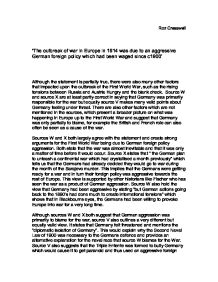 Roz Cresswell 'The outbreak of war in Europe in 1914 was due to an aggressive German foreign policy which had been waged since c1900' Although the statement is partially true, there were also many other factors that impacted upon the outbreak of the First World War, such as the rising tensions between Russia and Austria Hungry and the blank check. Source W and source X are at least partly correct in saying that Germany was primarily responsible for the war but equally source V makes many valid points about Germany feeling under threat. There are also other factors which are not mentioned in the sources, which present a broader picture on what was happening in Europe up to the First World War and suggest that Germany was only partially to blame, for example the British and French role can also often be seen as a cause of the war. Sources W and X both largely agree with the statement and create strong arguments for the First World War being due to German foreign policy aggression. Both state that the war was almost inevitable and that it was only a matter of time before it would occur. Source X states that " the German plan to unleash a continental war which had crystallised a month previously" which tells us that the Germans had already decided they would go to war during the month of the Sarajevo murder. ...read more.

Since the unification, the Germans were set upon becoming a major power. This would have a very significant impact upon how their foreign policy came across, as it would appear aggressive. The General Staff managed to take control of the Reichstag; this meant that Germany was being run by the military, which were very much in favour of war, so that they could create an empire. Blackbourn in source W states that "of course they would have preferred to get what they wanted without a war", but it implies that as long as they created an empire they did not care what happened between. This would be shown as aggression through their foreign policy. The sources make a number of valid points, however they gloss over or do not mention the other things that had occurred between Germany and other countries at this time. The Germans appear to make many decisions that would cause the Triple Entente not to trust them. The Moroccan Crisis of March 1905 supports the view of sources W and X, which both state that Germany was the aggressor. The Crisis caused relations between Germany and France to be damaged. Germanys efforts to form a wedge between France and England backfired and also created a stronger bond between France, England and Russia. ...read more.

Indeed, David Kaiser advances on sources X and W by saying that Germany did not deliberately plan war but believed war was an acceptable risk as it would be short and winnable and should not involved Britain. In conclusion, although all three sources agree that Germany was aggressive in their foreign policy, source V also gives a range of reasons for war and does not entirely blame Germany. Indeed it accepts that many factors occurred across Europe and although Germany had a big part to play in it, they were not just to blame. Their aggression in the years since c1900 will have impacted upon the scale of war but the Triple Entente also made Germany feel surrounded and gave them the need to be aggressive. Sources W and X give good evidence to it being solely Germany's fault. Other historians such as Fritz Fischer who see the war as a product of German aggression support this view. However John Moses, the author of source X was hugely influenced by Fritz Fischer and so his work may have been biased against Germany. Overall the sources and other evidence suggest that German foreign policy was aggressive, but that the other factors also played a hand in the start of the First World War. ...read more.