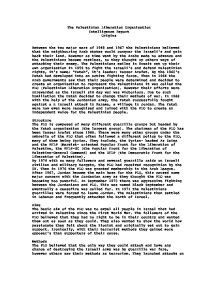 The Palestinian Liberation Organisation Intelligence Report Origins Between the two major wars of 1948 and 1967 the Palestinians believed that the neighbouring Arab states would conquer the Israeli's and gain back their land. However as time went by the Arabs made no advance and the Palestinians became restless, so they thought up others ways of attacking their enemy. The Palestinians exiles in Kuwait set up their own organisation in 1959 to fight the Israeli's and defend Palestinian rights, it's name; "Fatah", it's leader; Yasser Arafat. By the 1960's Fatah had developed into an active fighting force. Then in 1964 the Arab governments saw that their people were determined and decided to create an organisation to represent the Palestinians it was called the PLO (Palestinian Liberation Organisation). However their efforts were unrewarded as the Israeli six day war was victorious. Due to such humiliation the Fatah decided to change their methods of war. In 1968 with the help of the Jordanian army, the Fatah successfully fought against a n Israeli attack in Karama, a village in Jordan. ...read more.

This was named Black September and eventually a ceasefire was called for. In 1971 the Palestinians guerrillas were forced to leave Jordan. The Palestinians then settled in Lebanon and frequently attacked the North of Israel. Aims The basic aim of the PLO was to expel all people in Israel that had arrived in Palestine since the First World War. The followers of the PLO believed that they had no right to be in their country and wanted them out as soon as they could. They also wanted to show the world how passionate they felt about the Zionist and originally set out to gain support. Ironically, with their terrorist methods they gained more opposer's than supporters of their cause. Methods The PLO believed that the only way they could attack and have any chance of destroying the Israeli army was by guerrilla war fare, however others saw their methods as terrorism. They launched attacks on military targets from the borders of Israel and made surprise attacks on civilians and civilian targets. Attacking the citizens of Israel was a terrorist characteristic and they often went down this path. ...read more.

All British prisoners were then released however the Arabs were kept hostage. This attack showed that guerrilla tactics worked and terrorism reached a new age. The PLO also caused havoc and destruction at the Olympic games held in Munich in 1972. A group called Black September surrounded the Olympic village and took nine Israeli athletes as hostage. The terrorists blackmailed Israel saying that they would release their athletes if they in turn released 200 captured Arabs. After much confusion and a bloody firefight, any remaining hostages were shot dead by the surviving terrorists. It was called the Munich Massacre. There were many other terrorist attacks which were also followed by blackmail to get out Arab hostages this seemed to be quite a trend. Some people respected the PLO for their courage but others despised them for its attacks on civilians. In 1974 the Arab league - the association of the Arab states - declared the PLO to be the "sole legitimate representative of the Palestinian people". The PLO never really gained much respect in the world or victories over their land. ?? ?? ?? ?? ...read more.