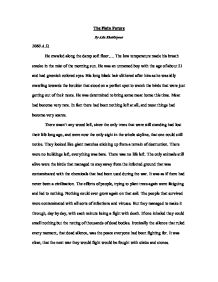 The Plain Future By Aziz Khabirpour 2060 A.D, He crawled along the damp soft floor.... The low temperature made his breath smoke in the mist of the morning sun. He was an unnamed boy with the age of about 21 and had greenish colored eyes. His long black hair slithered after him as he was idly crawling towards the boulder that stood on a perfect spot to watch the birds that were just getting out of their nests. He was determined to bring some meat home this time. Meat had become very rare. In fact there had been nothing left at all, and most things had become very scarce. There wasn't any wood left, since the only trees that were still standing had lost their life long ago, and were now the only sight in the whole skyline, that one could still notice. ...read more.

If one inhaled they could smell nothing but the rotting of thousands of dead bodies. Ironically the silence that ruled every moment, that dead silence, was the peace everyone had been fighting for. It was clear, that the next war they would fight would be fought with sticks and stones. "I know not what World War III will be fought with, but I know that World War IV will be fought with sticks and stones." -Albert Einstein, 1947A.D 2051 A.D, A little more than a century had passed ever since World War II. Maybe that was too much time... People had forgotten too much. Humanity had become too proud of itself. It thought it had achieved everything. ...read more.

This was only the beginning of the end. Human greed, ignorance and simply stupidity was in this case going too far, so far, that it was about to destroy civilization. On the 13th of December 2055, on an early Sunday morning, the NATO dropped a Nuclear Bomb on US territory. This was the beginning... the beginning of the end. Humanity at this point was to lose everything it ever managed to come up with. Since here were many more bombs to fall after 2055. As there is proof it seems like people of the past were smarter than we'll ever become. "...Unless another war is prevented it is likely to bring destruction on a scale never before held possible, and even now hardly conceived, and that little civilization would survive it." -Albert Einstein, 1947 A.D ...read more.