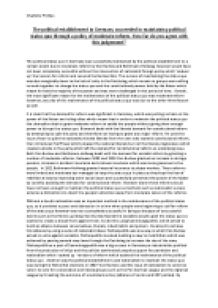 The political establishment in Germany succeeded in maintaining political status quo through a policy of moderate reform in the years before WWI. How far do you agree?

﻿Charlotte Phillips The political establishment in Germany succeeded in maintaining political status quo through a policy of moderate reform. How far do you agree with this judgement? The political status quo in Germany was successfully maintained by the political establishment to a certain extent due to moderate reform by Von Burlow and Bethmann-Hollweg, however would have not been completely successful without the intervention of nationalist foreign policy which ?soaked up? the tension for reform and secured the Burlow Bloc. The success of maintaining the status quo was also marginally down to the lack of unity in the Reichstag, which meant no groups were willing to work together to change the status quo and the constitutional powers held by the Kaiser which meant he held the majority of the power and was never challenged in this period of time. Overall, the most significant reason for the maintenance of the political status quo was moderate reform however; security of this maintenance of the political status quo was due to the other three factors as well. It is clear that the demand for reform was significant in Germany, which was putting a strain on the power of the Kaiser and ruling elites which meant that ...read more.

Von Burlow used the issue of nationalism to convince voters to vote for conservative and liberal groups such as the Pan German League and the Agrarian League by threating the outcome of a red-black victory (alliance of centre and SDP parties). By using nationalism he managed to succeed in getting voters to vote for parties within the Burlow Bloc, which kept socialists at bay thus maintaining the status quo within the Reichstag. Overall nationalism succeeded in maintaining the status quo however would not have been able to maintain it fully without moderate reform as nationalism alone was not a significant enough distraction to completely settle the need for reform of the political status quo. It could be argued that the Kaisers stability in the period was an important reason to factor into the maintenance of the political status quo, as his power was never challenged even when questionable situations arose such as the Daily Telegraph affair. However even though he was a strong figure at the time it was not the most significant reason from the maintenance of the political status quo. The power of the Kaiser was demonstrated during the Daily Telegraph affair in 1908. ...read more.