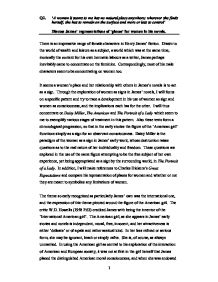 The Portrait of a Lady. Discuss James representations of 'places' for women in this novel.

Q2. 'A woman it seems to me has no natural place anywhere; wherever she finds herself, she has to remain on the surface and more or less to control' Discuss James' representations of 'places' for women in his novels. There is an impressive range of female characters in Henry James' fiction. Drawn to the world of wealth and leisure as a subject, a world which was at the same time, ironically the context for his own hermetic labours as a writer, James perhaps inevitably came to concentrate on the feminine. Correspondingly, most of his male characters seem to be concentrating on women too. It seems a woman's place and her relationship with others in James's novels is to act as a sign. Through the exploration of women as signs in James' novels, I will focus on a specific pattern and try to trace a development in his use of women as sign and women as consciousness, and the implications each has for the other. I will thus concentrate on Daisy Miller, The American and The Portrait of a Lady which seem to me to exemplify various stages of treatment in this pattern. Also these texts form a chronological progression, so that in the early stories the figure of the 'American girl' functions simply as a sign for an observant consciousness. Daisy Miller is the paradigm of the woman as a sign in James' early work, whose destruction raises questions as to the real nature of her individuality and freedom. These questions are explored in the use of the same figure attempting to be the free subject of her own experience, yet being appropriated as a sign by the surrounding world, in The Portrait of a Lady. In addition, I will make references to Charles Dickens's Great Expectations and compare his representation of places for women and whether or not they are meant to symbolise any limitations of women. ...read more.

Her husband would determine her function; his value is Imran Hussain Henry James intrinsic, hers linked to his. Isabel thus looks at what the men and women around her appear to signify, in simplistic terms, searching for people who will fit her ideals nearly enough for her to link herself to them. She fails to see that the real threat to her freedom comes from the way she is seen and fitted into social structures of signification - she assumes herself as subject to be external to them, and thus unthreatened and unplaced. The length of time it takes her to understand the interaction between herself and the world appears to be linked to her rather abstract and theoretical vision, which can shield her from unpleasant realties. Isabel faces a choice of sign function rather than of exploration and action. Unlike Newman, she is not looking for someone to express her, but for an ideal to which she can submit her independence in a form of moral action. The reality of such submission takes the form of a husband. Once again marriage is the paradigm for the young girl's absorption in to social, representative existence. No wonder then that faced with the pressure to make a concrete choice, Isabel recoils as she thinks they (Winterbourne and Ralph) are closing in on her freedom. On the other hand we watch Isabel being manipulated by Madame Merle, by the apotheosis of the social word which labels, not naively but deliberately, according to usefulness and practical value. The worldliness of Madam Merle is continually stressed, even Isabel is aware that her new friend is hardly natural: She was in a word too perfectly the social animal that man and woman are supposed to have been intended to be......Isabel found it difficult to think of her in any detachment or privacy, she existed only in her relations, direct or indirect, with her fellow mortals (p.278) ...read more.

Thus Great Expectations settles the debate of women and property rights by restoring propertied female characters to their proper roles. Miss Havisham clearly illustrates the failure of women's ability to manage property. Miss Havisham's investment decisions and settlement of her estate on Estella proved economically disastrous, because she wrecks the brewery and refuses to sponsor her male relatives, she blocks her financial capital from circulating within the proper channels of investment and trade, thus rendering it economically barren. The novel's ending may reflect Dickens's attitude about women and property rights. For the novel to arrive at some sort of happy conclusion, Miss Havisham must fulfil her proper economic role. Hence Miss Havisham aids her family in economic recovery and restores the family's patrilineal system. She financially helps Herbert secure his investment in a profitable business. She also wills Mathew Pocket 'a cool four thousand' (P. 423). By investing in her male relatives, Miss Havisham plays a vital role in preserving the patrilineal system. The novel's ending eliminates women as an economic force and repositions them in their proper place in Victorian society. In conclusion James and Dickens represent women as signifiers and symbols of disappointment, disillusionment and failure. Failure in acquiring true freedom and failure in successfully managing property and wealth whether in Daisy Miller or The Portrait of a Lady or Great Expectations, compared to men who are not only confident of their freedom and independence but cunningly manipulate, embezzle and defraud women of their wealth and honour without them realising. Women, despite their inherited wealth have no real power and have to struggle to find some sort of fixed place for themselves in the novels. In Dickens' and James' novels one can see how the women who fit their ideas were rewarded with happy lives, usually in the form of emancipation from male subordination. On the other hand, the women who did not conform to these ideas were punished in one way or another. Although not all of their attitudes reflected what was typical of the period in which they wrote, many did. ...read more.