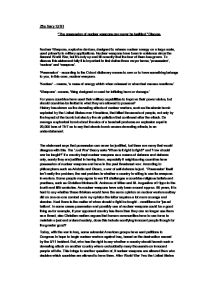 &quot;The possession of nuclear weapons can never be justified.&quot; Discuss.

Z�e Terry 13TFI "The possession of nuclear weapons can never be justified." Discuss. Nuclear Weapons, explosive devices, designed to release nuclear energy on a large scale, used primarily in military applications. Nuclear weapons have been in existence since the Second World War, but it's only up and till recently that the fear of them has grown. To discuss this statement fully it is important to first define three mayor terms; 'possession', 'nuclear' and 'weapons'. 'Possession' - according to the Oxford dictionary means to own or to have something belongs to you, in this case, nuclear weapons. 'Nuclear' - means, 'a mass of energy which when released or absorbed causes reactions.' 'Weapons' -means, 'thing designed or used for inflicting harm or damage.' For years countries have used their military capabilities to improve their power status, but should countries be limited to what they are allowed to possess? History has shown us the devasting effects of nuclear warfare, such as the atomic bomb exploded by the United States over Hiroshima, that killed thousands of people, not only by the impact of the bomb but also by the air pollution that continued after the attack. ...read more.

As nuclear weapons have only been around approx. 60 years, it is hard to say whether these thinkers would have the same opinion on nuclear warfare as they did on one-on-one combat as in my opinion the latter requires a lot more courage and stamina. Next there is the matter of when should a fight be fought - conditions for 'jus ad bellum'. In some cases possession and possibly use of nuclear weapons could be a good thing as for example, if your opponent country has them then they can no longer use them as a threat, also Christian realism argues that human communities have to use force to maintain a just and ordered society, does this include scarifying innocent people though for the greater good? Today, with the war in Iraq, some extremist American groups have sent petitions to Congress in hope to begin nuclear warfare against Iraq, based on the destruction caused by the 9/11 incident. But, who has the right to say whether a country should launch such a devasting attack on another country where undoubtedly many thousands on innocent people will die. ...read more.

While a realist Christian would say that if war serves the national interest then it is acceptable, others say, such as pacifist Christians, that war is unconditionally unacceptable and so are all weapons involved in war. But even so, we can relate the topic of nuclear war back to the Bible. Nuclear weapons are capable of wiping out large amounts of space at once; the same can be said of the flood that God caused to cleanse his world of evil, where he only saved a few, in Genesis 6-9. But this time, it's not God destroying the world, it's a select few, who let their countries suffer the consequences of their actions. Personally, I believe that the amount of nuclear warheads needs to be reduced globally, but if they are going to exist then countries should all have them to act as a deterrent for war. There should be a league, such as the League of Nations, that could objectively decide on what strengths and amounts each country should have instead of giving this power to one country, especially when religious beliefs are as ever, being used to cause and used as excuses for war. ?? ?? ?? ?? ...read more.