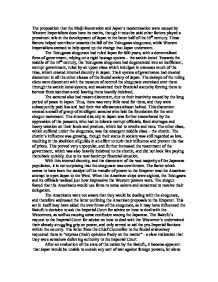 The proposition that the Meiji Restoration and Japan's modernisation were caused by Western Imperialism does have its merits, though it must be said other factors played a prominent role in the development of Japan in the latter half of the 19th century.

The proposition that the Meiji Restoration and Japan's modernisation were caused by Western Imperialism does have its merits, though it must be said other factors played a prominent role in the development of Japan in the latter half of the 19th century. These factors helped contribute towards the fall of the Tokugawa shogunate, while Western Imperialism seemed to help speed up the change that Japan underwent. The Tokugawa shogunate had ruled Japan for 800 years, with a decentralised form of government, relying on a rigid hostage system - the sankin kotai. Towards the middle of the 19th century, the Tokugawa shogunate had degenerated into an inefficient, corrupt government, ruled by an upper class which indulged in excesses much of the time, which created internal disunity in Japan. Their system of governance had created discontent in all the other classes of the feudal society of Japan. The daimyo of the ruling clans were discontent with the measure of control the shogunate exercised over them through the sankin kotai system, and weakened their financial status by forcing them to borrow from merchants and leaving them heavily indebted. The samurai also had reason discontent, due to their inactivity caused by the long period of peace in Japan. Thus, there was very little need for them, and they were subsequently paid less and had their rice allowances almost halved. This discontent created a small of group of intelligent samurai who laid the foundation for the anti-shogun movement. The internal disunity in Japan was further exacerbated by the oppression of the peasants, who had to tolerate corrupt officials, food shortages and heavy taxation on their lands and produce, which led to revolts and riots. ...read more.

This slogan, was a rallying point for the majority of the population, and severely undermined the grip of the Tokugawa shogunate. The result of this anti-Western feeling was the Choshu uprising. The Choshu's clan's uprising, led to an assault on Kyoto, which eventually led to the defeat of Bakufu forces. Other Western clans, including he prominent Satsuma clan, and merchants, as well as the British government conspired in an alliance to overthrow the shogunate, though it must be said that its role would have been somewhat limited. The shogunate was overthrown by these powerful forces, and the Meiji Emperor's powers restored. It is possible to see that the long suppression and oppression of the classes of the Japanese people, finally sparked into a revolt by the arrival of the Americans. The contribution the Imperialist policies of the West had to the Meiji Restoration cannot be questioned, but it is possible to argue that the impact of the West would not have been the same (significantly less) had the Shogunate's government proven more efficient, and more adept at preventing internal discord. Historians such as Minear argue that "The Tokugawa clan, headed by the shogun, had ruled Japan since 1603, and was now blamed for the shame which the unequal treaties had inflicted upon Japan. In the end, the Tokugawa shogunate was overthrown and a new group of leaders emerged at the same time a new emperor ascended the throne." It is clear that he feels that the unequal treaties, which caused anti-Western sentiment, are mainly to blame for the rise of the Meiji Emperor. ...read more.

One last aspect of Japan's modernisation which the West influenced a great deal was the ambitions it took once it felt developed enough. In order to feel completely modernised, Japan also felt it had to model its ambitions on the Western powers as well - by seizing land from other nations. Indeed, its rapid change from an agrarian society meant that the resources and raw materials available from a colony, territory or annexed land would be quite welcome. The West's help in trying to open up Korea, which lead to the Sino-Japanese War meant that Japan was able to profit greatly by taking the place of China as Asia's leading power. The Anglo-Japanese alliance also strengthened Japan's position as a modernised power, and helped it gain valuable resources from which it could further expand its booming industries. The Anglo-British alliance also served as protection for the Japanese from other Western powers, which allowed it to modernise and keep its hold on land it had seized. In conclusion, it must be said that Western Imperialism did, to a certain extent, help restore the Meiji Emperor to his throne. However, there were also many factors stemming from the discontent of the feudal classes of Japan which led to the fall of the shogun and the Emperor's subsequent rise. The modernisation of Japan must be said to have been greatly influenced by the West, for while the Japanese did not adopt the morals viewpoint of Western society, Western Imperialism had been able to project its influence sufficiently enough to greatly inspire and spur on the Japanese in their quest for modernisation. ...read more.