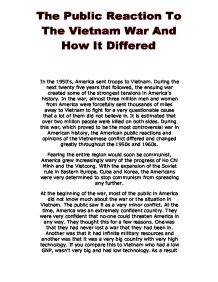 The Public reaction to the Vietnam war and how it differed

In the 1950's, America sent troops to Vietnam. During the next twenty five years that followed, the ensuing war created some of the strongest tensions in America's history. In the war, almost three million men and women from America were forcefully sent thousands of miles away to Vietnam to fight for a very questionable cause that a lot of them did not believe in. It is estimated that over two million people were killed on both sides. During this war, which proved to be the most controversial war in American history, the American public reactions and opinions of the Vietnamese conflict differed and changed greatly throughout the 1950s and 1960s. Fearing the entire region would soon be communist, America grew increasingly wary of the progress of Ho Chi Minh and the Vietcong. With the expansion of the Soviet rule in Eastern Europe, Cuba and Korea, the Americans were very determined to stop communism from spreading any further. At the beginning of the war, most of the public in America did not know much about the war or the situation in Vietnam. The public saw it as a very minor conflict. ...read more.

The part of the country that you were in also determined whether you were pro or anti-war. In the west and south of America, the residents were mostly Nationalistic and patriotic, resulting in a pro-war attitude. But, in other parts like San Francisco and California the attitudes were mostly democratic and peaceful and they opposed the war. In the sixties Black Rights were also emerging. Martin Luther King among other leaders encouraged black people to fight for individual rights and justice. A lot of the public felt that America was going against these beliefs. Only 15% of the American population were black but there were more black people sent the fight in Vietnam than white and this led to unpopularity for the war because people began seeing the war as corrupt and dirty. There were more black people in the war partly because of wealth. White people, like in South Africa, were generally wealthier than black people and as a result, more white people were able to dodge the draft which they received on their 18th birthday. In the late 60s, the public opinions changed dramatically. ...read more.

The My Lai Massacre in 1969 was also brought through the media which shocked the world and created even more opposition. The public began even more protesting which made the government finally realise their unpopularity. In 1971, there was a poll held to the public which asked if they supported the war in Vietnam in which the results showed that 60% were still pro-war but still 40% were anti-war. This showed that, although there was major unpopularity, most people still supported the war. After great efforts by the US to withdraw, and the establishment of a cease-fire on 27th January, 1973, American soldiers began leaving Vietnam. The North Vietnamese finally conquered South Vietnam in early 1975, totally ignoring the cease-fire and on 2nd July, 1976, North and South Vietnam were officially united as a single communist state. It had cost an estimated 2 million lives and the injury or disablement of many millions of others. In conclusion, although most people had been in support of the war in Vietnam at the beginning, there was a real shift in public opinion and a lot of opposition to it supported by famous people in both government and music culture, most of the American public supported the war but not nearly as much as previously when the war began. ...read more.