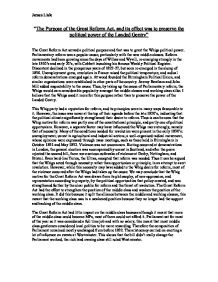 &quot;The Purpose of the Great Reform Act, and its effect was to preserve the political power of the Landed Gentry&quot;.

"The Purpose of the Great Reform Act, and its effect was to preserve the political power of the Landed Gentry" The Great Reform Act served a political purpose and that was to grant the Whigs political power. Parliamentary reform was a popular cause, particularly with the new middle-classes. Reform movements had been growing since the days of Wilkes and Wyvill, re-emerging strongly in the late 1810's and early 20's, with Cobbett launching his famous Weekly Political Register. Discontent declined in the prosperous years of 1822-27, but soon re-emerged in the slump of 1830. Unemployment grew, revolution in France raised the political temperature, and radical reform demonstrations emerged again. ...read more.

However, a separate factor may have influenced the Whigs more strongly, namely that of necessity. Many of the conditions needed for revolution were present in the early 1830's: unemployment; unrest in agricultural and industrial sectors; a well-organised radical movement, whose opinions were expressed through mass meetings, such as those held in Birmingham in October 1831 and May 1832. Violence was not uncommon. Rioting occurred at demonstrations in London, the general election was accompanied by unrest in Scotland, and after the peers rejected the second bill, there were serious outbreaks of violence at Derby, Nottingham, and Bristol. Even hard-line Tories, the Ultras, accepted that reform was needed. ...read more.

The Great Reform Act had little impact on the middle class because although it meant that more of the middle class could become MPs, most of them could not afford it. Parliament sat for most of the year so it was considered a full time job and with no salary, this meant that most middle class gentlemen considered local politics to be more rewarding. Therefore the composition of Parliament remained mostly unchanged from before 1832. The aristocracy carried on exerting a lot of influence on events at Westminster. This shows that the bill didn't really change the Parliament worked, the rich land owning class still ruled Westminster. James Lisle ...read more.