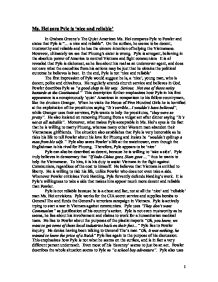 THe Quiet American - Pyle is nice and reliable. Discuss

Ms. Hei says Pyle is 'nice and reliable' In Graham Greene's The Quiet American Ms. Hei compares Pyle to Fowler and states that Pyle is "... a nice and reliable". On the surface, he seems to be decent, trustworthy and reliable and he has the sincere intention of helping the Vietnamese. However, ultimately we see that Phuong's sister is wrong. Pyle is arrogant, believing in the absolute power of America to control Vietnam and fight communism. It is al revealed that Pyle is dishonest, as he lies about his real as an undercover agent, and does not care what the casualties from his actions may be just that he obtains the political outcome he believes is best. In the end, Pyle is not 'nice and reliable' The first impression of Pyle would suggest he is, a 'nice', young man, who is decent, polite and chivalrous. He regularly attends church service and believes in God. Fowler describes Pyle as "a good chap in his way. Serious. Not one of those noisy bastards at the Continental." This description further emphasizes how Pyle in his first appearance is a conspicuously 'quiet' American in comparison to his fellow countrymen, like the drunken Granger. ...read more.

He believes that Vietnam is entitled to liberty. He is willing to risk his life, unlike Fowler who does not even take a side. Whenever Fowler criticizes York Harding, Pyle fervently defends Harding's work. It is Pyle's willingness to take a side that makes him appear much more decent and reliable than Fowler. Pyle is not reliable because he is a cheat and liar, not at all the 'nice' and 'reliable' man Ms. Hei envisions. Pyle works for the CIA secret service and supplies bombs to General The and funds the General's terrorism campaign in Vietnam. Pyle is actively trying to start a war in Vietnam against communism. Pyle uses "They don't want Communism" as justification of his country's action. Pyle is not even trustworthy as he seems, he lies about his involvement and claims to work for a humanitarian medical team. He lies to Fowler about the purposes of the plastic imports "Oh, you know, we want to get some of these local industries back on their feet..." Pyle lies to Fowler inquiry. He denies having been talking to General The's man "Oh, it was nothing, he wanted to know the price of a Buick" Pyle lies again to the purpose of his discussion. ...read more.

says Pyle calmly to Fowler explaining the Continental Hotel bombing. During the watchtower scene, he is ready to kill the innocent guards exposing that he is ruthless. He has no qualms about killing those who are in his way. Pyle does not even care about civilian casualties stating "they are just casualties of war, Thomas". He looks down upon the French because they are losing the war and not managing to contain Communism. Pyle arrogance also extends to relationships. He believes that Phuong would willingly go with him, as "... [Phuong] can't be happy - not in her situation. She needs children." Not only that, Pyle also trusts Fowler implicitly, never imagining that Fowler would betray him. His ego, leads Pyle to always believe that his actions are always for the best and that he, or America is never wrong. Though it seems on the outside Pyle is nice and chivalrous young man, he is in fact not. He is a cheat and a liar; he deceives his friends, and cares only for what he believes is right. He can calmly kill those that are in his way, and kill indiscriminately to achieve his aims. Ms Hei is mistaken when she believed that Pyle, is the 'nice' innocent 'Quiet American' By: Michael Phan 1 ...read more.