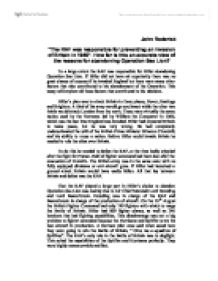 &quot;The RAF was responsible for preventing an invasion of Britain in 1940&quot;. How far is this an accurate view of the reasons for abandoning Operation Sea Lion?

John Roderick "The RAF was responsible for preventing an invasion of Britain in 1940". How far is this an accurate view of the reasons for abandoning Operation Sea Lion? To a large extent the RAF was responsible for Hitler abandoning Operation Sea Lion. If Hitler did not have air superiority there was no great chance of success if he invaded England but there were many other factors that also contributed to his abandonment of the Operation. This essay will explore all those factors that contributed to his decision. Hitler's plan was to attack Britain in three places, Dover, Hastings and Brighton. A third of his army would go southwest while the other two thirds would attack London from the north. These were virtually the same tactics used by the Normans led by William the Conqueror in 1066, which was the last time England was invaded. Hitler had expected Britain to make peace, but he was very wrong. He had completely underestimated the will of the British Prime Minister Winston Churchill, and his ability to rouse a nation. Before Hitler could invade Britain he needed to rule the skies over Britain. To do this he needed to defeat the RAF, at the time badly crippled after the fight for France. Half of fighter command had been lost after the evacuation of Dunkirk. ...read more.

The aircraft would then be scrambled to fight the Luftwaffe. This gave them a huge advantage. It meant that Britain did not have to keep planes in the air the whole time to fight the Luftwaffe. This saved a lot of time and resources. The RAF had the home advantage. They fought all their battles over home ground. If they were shot down they were ready to fight another battle, but if a German was shot down he was a prisoner of war. German planes had only thirty minutes of fuel when they reached Britain before they had to turn round. British planes on the other hand could return to base and refuel and get back in the air to continue the attack. If Germany had gained control of the skies the next problem they would have met would be the Royal Navy. Britain's navy was far superior to Germany's, which was currently severely crippled after their Norwegian campaign. Germany had only four main battleships to Britain's 20, some of which were French. The Germans had failed to capture any of the French ships as the French had scuttled most of them and some had escaped to Britain. Even with air superiority Germany would still have had great difficulty crossing the English Channel. ...read more.

He spread rumours that he was going to attack Spain and North Africa as well as Britain. No historian has yet proved that the Operation Sea Lion was a hoax to con Stalin into believing that Hitler had other intentions. This would fit in perfectly with Hitler's main aims such as Lebensraum. Hitler had used many deception methods while invading France, so to pretend to invade Britain would not be new to him The RAF played a key role in Hitler's decision to abandon Operation Sea Lion. Without the RAF Britain would have surely been invaded, if that was Hitler's real intention. (Some historians believe that Operation Sea Lion was just a front to trick Stalin into thinking that Hitler had no intention in invading the USSR.) If this were the case, why would Hitler have sacrificed hundreds of his aircraft and crew? It seems much more likely that Hitler underestimated Britain's will to fight and their resources. Operation Sea Lion was a planned attack, but Hitler realised that it would not work so he eventually abandoned the operation. This means that the RAF played a large role in Hitler's choice of abandoning Operation Sea Lion. If they had not been as strong as they were Britain would have fallen to Germany, subject only to Germany managing to gain control of the seas. ...read more.