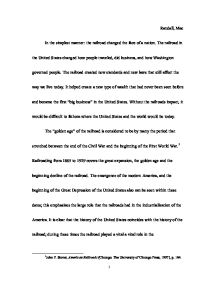 The railroad in the United States.

This was needed because the expansion of the rails had now brought the need to move the freight from one line to another. This was not possible because throughout the country there were different gauges. For example in the south the popular gauge was five feet, but on other railroads like the Erie the gauge was six feet. It was decided amongst railroads that a standard must decided on, and that standard became four feet, eight and one half inches.15 Another standard that was created and is still used today is standardized time. Until the movement for Standard Time, each town had its own time. "There were, for example, thirty-eight different times in the state of Wisconsin alone." Given the amount of different times, the speed of trains, and the distance these trains traveled. This spelled one thing: complete chaos. Eventually the problem was solved in 1883, when the General Time Convention was held by the railroads. At this convention it was decided that the continental United States would be broken up into four standard time zones. People soon found it easy to set their clocks by "railroad" time, and thus the railroad standard became a national standard. Other technological innovations that were created to aid the expansion and consolidation of the railways were: the use of steel rails, the automatic coupler, and the air brake. The automatic coupler allowed a coupler to close on impact, but still be able to open from the side of the car. The air brake, invented by George Westinghouse, allowed trains to stop much quicker than they had been able to in the past. Besides bringing about new technology, the consolidation of the railways also brought about the great railroad barons. The railroad had become a likely stop for the strong businessmen interested in making millions by manipulating the rail system. But in gaining such immense power, many railroad builders and consolidators became unethical and ruthless in their business practices. ...read more.