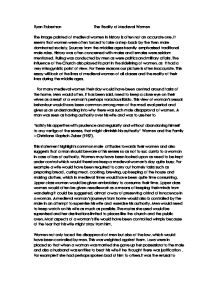 The Reality of Medieval Woman

Ryan Robertson The Reality of Medieval Women The image painted of medieval women in history is often not an accurate one. It seems that women were often forced to take a step-back by the then male dominated society. Sources from the middles ages heavily emphasised traditional male roles. History was often concerned with males and females were seldom mentioned. Ruling was conducted by men as were politics and military affairs. The influence of the Church also played its part in the sidelining of women, as it had a very misogynistic point of view. For these reasons our picture is often inaccurate. This essay will look at the lives of medieval women of all classes and the reality of their lives during the middle ages. For many medieval women their day would have been centred around tasks of the home. Men would often, it has been said, need to keep a close eye on their wives as a result of a woman's perhaps voracious libido. This view of woman's sexual behaviour would have been common among men of the medieval period and gives us an understanding into why there was such male disapproval of women. A man was seen as having authority over his wife and was to use her to "satisfy his appetites with prudence and regularity and without abandoning himself to any vertigo of the senses, that might diminish his authority" Women and the Family - Christiane Klapisch-Zuber (1987). ...read more.

This kind of view would have gathered great support because the male dominated attitudes that the Church as an establishment held. The Church can be seen to exercise its power in its holy war against women by stripping women of their lands on the basis of accusations of fornication. The Church during the medieval period tends to look at women through the story of Adam and Eve. Eve, was the one who ate the fruit of the tempting snake and was cast out of Eden for doing so. It is almost as if blame is pointed at the female as a species. As women faced the general disapproval of men they had to endure a more personal form of disapproval from their husbands. Having authority was in the hands of the husband and it was important that he upheld his authority, often being quite dominating and exercising his right to beat his wife. This would be common place among spouses. Things like the woman's nature were required to be managed, and as a mother she was required to set an example to her daughters to be the same. A wive's daily tasks, were designed to keep her docile and obedient to men. Wives were not always confined to the home however. ...read more.

The Church paints a picture of women's sexuality as them being "the seducers" and certainly the female would not have been passive. The source Constructing the Damsel in Distress - Terry Jones (2004) tells of the expectations of women to be sexually active and how they in turn would have the same expectations of her husband. If a man could not live up to a woman's expectations then it has been known for her to make this clear to everyone. Also in Terry Jones's "The Middle Ages" he writes of a man who had this experience, Walter de Fonte. In 1292 his wife claimed he was impotent and was forced to perform infront of a bed chamber of wise older women who could then decide the truth of the accusations. It seems that the lives of medieval women do not lie on just one side of the coin. There appears to be a kind of tug of war as regards to their historic experiences where women are seen as being male dominated which is the traditional view to revisionist historians telling us of the opposite. It is true that women worked hard and so much was expected of them and that they faced legal complications and they also faced the influence of the Church but there are enough exceptions to know that life as a medieval women could have been quite balanced. Terry Jones describes their relationship in history as a "varying dynamic", as it is still. ...read more.