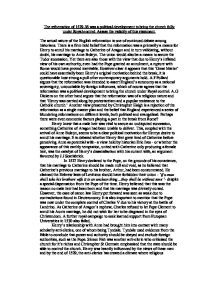 The reformation of 1529-36 was a political development to bring the church fully under Royal control. Assess the validity of this statement.

The reformation of 1529-36 was a political development to bring the church fully under Royal control. Assess the validity of this statement. The actual nature of the English reformation is one of continued debate among historians. There is a firm held belief that the reformation was a primarily a means for Henry to annul his marriage to Catherine of Aragon and in turn validating, without doubt, his marriage to Anne Boleyn. The union would also be a means to secure the Tudor succession. Yet there are also those with the view that due to Henry's inflated view of his own authority, even had the Pope granted an annulment, a rupture with Rome would have proved inevitable. However clear it appears that this 'Great Matter' could have essentially been Henry's original motivation behind the break, it is questionable how strong a pull other contemporary arguments hold. A.F Pollard argues that the reformation was intended to assert England's autonomy as a national sovereignty, untouchable by foreign influences, which of course agrees that the reformation was a political development to bring the church under Royal control. A.G Dickens on the other hand argues that the reformation was of a religious nature and that 'Henry was carried along by protestantism and a popular resistance to the Catholic church.' Another view presented by Christopher Haigh is a rejection of the reformation as a single master plan and the belief that England experienced a series of blundering reformations on different levels, both political and evangelical. ...read more.

This charge was advanced in December when the charge was extended to the whole clergy. However, Henry dropped the charges for a compensation of �119,000. This is the first step in a chain of events, which makes modern day historians question the economic factor involved in attaining a divorce and breaking from Rome. 1532-34 saw significant political breakthroughs, the first of which was the act in restraint of annates. This was Henry's first direct attack aimed at the Pope, and the starting block of The Break. Only one fifth of the payments of the senior clergy would now be sent to the Vatican. Therefore, this act can also be seen as an economic gain. The convocation also passed the Submission of the Clergy, which recognised that it could not make canon law without royal licence, a crushing blow to the legal powers of the church. In the same year Henry appointed Thomas Cranmer as Archbishop of Canterbury, and Cranmer granted Henry a divorce the next year. Henry was now free to marry his pregnant lover, Anne Boleyn, which he did in 1533. This marked the point of no return in Henry's policy. The Pope responded to the marriage by excommunicating both Henry and Cranmer from the Roman Catholic Church. Also in this year the act of appeals removed all legal appeals to Rome. ...read more.

In conclusion, I believe that the primary cause for the English reformation was a political development designed to bring the church under royal control, and the reformation was not wholly about changing religious doctrine. Henry did not have a qualm with the Catholic Church itself, but more the Pope. In the early years of Henry's reign he had proved himself a devout Catholic. He joined the Holy league in 1512 and was awarded the title of "defender of the faith" in 1521. Even after The Break, Henry continued to take Catholic mass until he passed away. The fundamental push towards the reformation was Henry's need for an annulment, and his desire to marry Anne and sucure his succession. Christopher Haigh held a polictical perspective on the reformation, however he believes that the process was full of uncertainty and contradictions as does Scarisbrick, " the Henrician Reformation was a movement of inexplicable halts and starts, sudden hesitation and zigzagging... But this is not to deny the overall purposiveness of these years. They were as was Henry himself - belligerent and outwardly confident, yet nervous and uncertain; and they were thus precisely because he dominated them." As for the economical factor, Henry was known as 'a nimble opportunist,' as such, financial pressure was only used as a means to obtain his ultimate goal of a national sovereignty, and as a means to benefit himself through economic gain when the chance arose. Word count = 2412 ...read more.