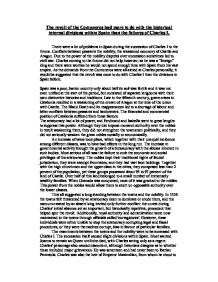 The revolt of the Comuneros had more to do with the historical internal divisions within Spain than the failures of Charles I.

The revolt of the Comuneros had more to do with the historical internal divisions within Spain than the failures of Charles I. There were a lot of problems in Spain during the succession of Charles I to the throne. Conflicts between peasants the nobility, the weakened economy of Castile and Aragon. Due to the power of the nobility disputes over succession sometimes led to civil war. Charles coming to the throne did not help however; as he was a "foreign" king and there were worries he would not spend enough time with Spain from his vast empire. As the demands from the Comuneros were all aimed at Charles personally, it would be suggested that the revolt was more to do with Charles I than the divisions in Spain before. Spain was a poor, barren country only about half its soil was fertile and it was not even unified at the start of the period, but consisted of separate kingdoms with their own distinctive histories and traditions. Late in the fifteenth century, grave crises in Catalonia resulted in a weakening of the crown of Aragon at the time of the union with Castile. ...read more.

Additionally, royal authority and administration were now maintained in the towns through officials called 'corregidores'. However, these individuals were either unable to stop the aristocracy corrupting legal and fiscal procedures, or they were themselves corrupt, bias in favour of particular families. The resentments between the towns and the nobility were to be increased with Charles I. The succession itself caused slight divisions within Spain. Most wanted Joanna to remain as Queen until she died, with Charles acting only as a regent. Charles' personage also caused discontent, although historians disagree as to whether these included major grievances. He was seventeen and had never been to Iberian Peninsula. Charles was also the heir of Emperor Maximilian, from whom he stood to inherit the large Habsburg lands and a claim on the imperial title. Many Spaniards feared that Charles' 'foreign' lands and imperial ambitions would leave him little time for Spain, causing him to be absent for large periods as he focused his attention, and Spain's money, elsewhere. Some worries began to be thought as real problems when Charles crowned himself King of Spain in March 1516, but not arriving to Spain until September 1517. ...read more.

Charles' financial demands also caused major discontent. Charles demanded a large payment of 600,000 ducats to be paid over the three years. The reaction to the Cortes accepting this was swift. Many Cortes deputies were severely criticised by the towns they had represented. The actions of Charles during 1516 - 20 upset and alienated a good deal of Spain's ruling society, especially Castile's servicio paying towns, by proving their worst fears to be true. Charles was late arriving and swift to depart, appearing to be the absent monarch they had first envisaged. He favoured Burgundians over local men and women, giving them key positions, and he imposed a large financial drain for projects outside the Spanish sphere of influence. Charles exacerbated existing internal conflicts through both his weak leadership and general absence, while doing nothing to quell such rivalries. In a country where the greatest power struggle was between the grandees and the towns, Charles allied with neither and angered both. Riots had occurred before the king's departure, and these soon turned into rebellions. He inflamed a strong and long-running conflict and the towns, the side that was losing power, exploded into rebellion against both the king, and the government of Castile itself. ...read more.