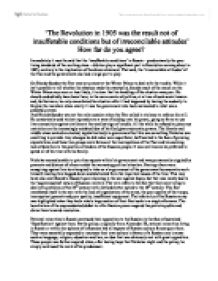 'The Revolution in 1905 was the result not of insufferable conditions but of irreconcilable attitudes' How far do you agree?

'The Revolution in 1905 was the result not of insufferable conditions but of irreconcilable attitudes' How far do you agree? Immediately it must be said that the 'insufferable conditions' in Russia - predominantly the poor living standards of the working class - did also play a significant part in Revolution coming about in 1905, contrary to the implication of the above statement. That said, the 'irreconcilable attitudes' of the Tsar and the government also had a large part to play. On Bloody Sunday the Tsar was not present at the Winter Palace to deal with the trouble. While it isn't possible to tell whether his absence made the eventually, bloody result of the march on the Winter Palace any more or less likely, it is clear that his handling of the situation was poor. He should undoubtedly have been there, in the nerve centre of politics, at a time of such social tension and, furthermore, he only exacerbated the situation after it had happened by having the audacity to forgive the marchers when clearly it was the government who had overreacted to what was a peaceful protest. ...read more.

The inferiority of the Russian army was highlighted when they had a whole large section of their fleet sunk in a single afternoon. The humiliation of the unprecedented defeat to a Far Eastern power angered the patriotic public and drove them towards revolution. National minorities in Russia continued their opposition to the Russian in the face of sustained 'Russification' against them. By the policy, originally from Alexander III, national minorities living in Russia or within her spheres of influences had all aspects of Russian culture forces upon them. They were essentially expected to renounce their own culture in favour of a Russian one in areas such as language, religion, education and law, an idea that was obviously met with great opposition. These people was further angered when, after having hope that Nicholas might end the policy, he simply continued the work of his predecessor. However the poor conditions of everyday life in Russia at this time meant 'insufferable conditions' cannot be discounted as a factor. The events of Bloody Sunday also imply that the urban workers had issues with the state of Russia beyond political qualms, as they were marching on the Winter Palace in order to present a petition that they had collected demanding an improvement in their living standards. ...read more.

Information about politics was not widely available to them, especially the rural peasantry, and even if it had been their low literacy rate would have prevented most from understanding it. They instead concentrated on the day to day living of their and it was ultimately when this was affected and living conditions were at an insufferable level that they made a stand against the government. In conclusion it can be said that the two themes of factors mentioned in the statement played a roughly equal part in bringing about the 1905 Revolution. Each of the groups involved in the revolution - the liberals, the middle class and the working class - each had their own agendas with those of the liberals and middle being associated with 'irreconcilable attitudes' and those of the working class being linked with 'insufferable conditions', though obviously there would have been overlap between the two. Without any of these three groups the Revolution would not have been what it was, particularly the lower class as they gave the anti-government movement the numbers and support it needed to be considered a revolution. ...read more.