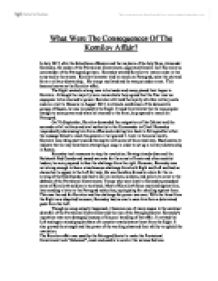 The Rightwanted a strong man to be leader and many placed their hopes in Kornilov.Although the majority were monarchists they agreed that the Tsar was toounpopular to be returned to power. Kornilov still held the loyalty of a fewmilitary units and ...

What Were The Consequences Of The Kornilov Affair? In July 1917, after the failed June offensive and the mayhem of the July Days, Alexander Kerensky, the leader of the Provisional Government, appointed General Lavr Kornilov as commander of the Petrograd garrison. Kerensky wanted Kornilov to restore order in the army and in the streets. Kornilov however tried to march on Petrograd, seize the city and form a military dictatorship. His troops mutilated and he was put under arrest. This became known as the Kornilov affair. The Right wanted a strong man to be leader and many placed their hopes in Kornilov. Although the majority were monarchists they agreed that the Tsar was too unpopular to be returned to power. Kornilov still held the loyalty of a few military units and on a visit to Moscow in August 1917, to attend a conference of the democratic groups of Russia, he was lionised by the Right. It made him believe that he was popular enough to seize power and when he returned to the front, he prepared to march on Petrograd. ...read more.

Troops who were loyal to Kerensky persuaded some of Kornilov's soldiers to turn back. Most of Kornilov's force mutinied against him, later sending a letter to the Petrograd authorities, apologising for rebelling against them. This was the end for Kornilov and his challenge for power was over. With the threat from the Right now dispelled however, Kerensky had no one to save him from a determined push from the Left. Though no coup actually happened, it became one of many causes to the eventual downfall of the Provisional Government and the rise of the Petrograd Soviet. Kerensky's reputation was now damaged, because of his poor handling of the affair. It revived the Left and again raised peoples fears of a counter-revolutionary threat from the Right. It also proved the strength and the power of the working class and their ability to uphold the revolution. The Kornilov affair was used by the Petrograd Soviet to make the Provisional Government look "dishonest", weak and unable to control the various factions challenging for control. ...read more.

Overall, it 'intensified mutual distrust and completed work of destruction'. General Kornilov believed that only discipline and strong leadership could actually save Russia and along with the clever tactics of Lenin and the Bolsheviks, the PG were doomed to failure. The PG weren't popular at this stage and made many mistakes such as arming the Bolsheviks in the Kornilov affair which aided them in regaining their popularity. The authority given to the government was to deal with the major problems that Russia were facing, but they weren't using their given authority in the appropriate way and this made them unpopular with the Russian people. The Kornilov Coup was important because it lead to the eventual downfall of the PG. The soviet used the Kornilov Affair to make the PG look dishonest and weak. Arming of Bolsheviks in the Kornilov affair allowed them to gain back the popularity that they had lost and gave them military resources which could overthrow the provisional government. Kerensky had armed the one party that since April had been committed to overthrowing the PG, and the Bolsheviks now looked like the saviours of Petrograd. ...read more.