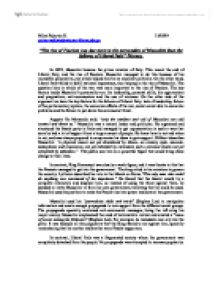 &quot;The rise of Fascism was due more to the personality of Mussolini than the failures of Liberal Italy&quot; Discuss

Milan Pejnovic D. 11/05/04 [email protected] "The rise of Fascism was due more to the personality of Mussolini than the failures of Liberal Italy" Discuss. In 1922, Mussolini became the prime minister of Italy. This meant the end of Liberal Italy, and the rise of Fascism. Mussolini managed to do this because of his incredible personality, one which helped him be an excellent politician. On the other hand, Liberal Italy failed to fulfill national expectancy, also helping in the rise of Mussolini. The question here is which of the two was more important to the rise of Fascism. The key factors inside Mussolini's personality are: his leadership, personal skills, his opportunism and pragmatism, anti-communism and the use of violence. On the other side of the argument we have the key factors for the failures of Liberal Italy: lack of leadership, failure of the parliamentary system, the economic effects of the war, social unrest dew to economic problems and the failure to put down the communist threat. Augusto De Marsanich said: "only the intellect and will of Mussolini can still control and direct us." Mussolini was a natural leader and politician. He organized and structured the fascist party in Italy and managed to get representation in such a way that soon he had a lot of support from a large amount of people. ...read more.

Marshal Diaz reported to have said: "Your majesty, the army will do its duty; however, it would be well not to put it to the test." "Only maniacs never change. New facts call for new positions" Mussolini was an intuitive person, projecting himself as a flexible pragmatist, which added to his opportunism, aided him to get the help he needed from the various political and social groups. Being a socialist before the war, he discovered that it lacked support in Italy and that he would never get to power. There was too much opposition. So he changed into a pro capitalist, anti-communist supporter. This change brought him more support and acceptance. He also changed from extremist to moderate, depending on the needs. While the "ras" were asking for a complete Fascist revolution, he decided to take a more moderate stance and accept the king's proposal for him to become the head of the government. He knew which position to take and when to take it, having no real ideology but gaining and maintaining power. Furthermore, Fascism also adopted some left wing policies in order to gain the support of the groups who had once sympathized with the socialists and communists. ...read more.

His harshness and his anti-communist views won him the support of the property owners, businessmen and the Church, who had "fear of a revolution". On the other hand, the government "turned a blind eye" (Richard Thurlow) to the left wing upheavals in Milan and Turin. By doing nothing, they left space for the Fascists to act. The government had decided to make a "social appeasement" (Richard Thurlow), thinking that intervention would create more public unrest. This position taken by the government "encouraged the disaffected middle class to turn to the squadristi for adequate protection." What they really did was give the opportunity to the Fascist to prove themselves more valuable than the government in charge, thus forcing King Emmanuel to invite Mussolini to form his Government. In conclusion, after analyzing Mussolini's personality and the failures of Liberal Italy, a sensible consensus can be established between both of the factors. It is clear that the failures of Liberal Italy created a scenario full of social, economical and political problems. But it is also clear that not anyone would have managed to gain power and put the Fascists into the government. The fascists needed both to accomplish their rise to power. Both factors complement each other. They needed the unstable scenario left by Liberal Italy and also needed someone who had the right personality to grab power. ...read more.