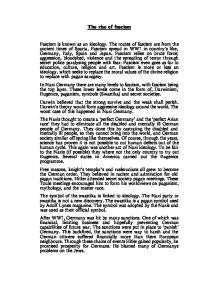 The rise of fascism

The rise of fascism Fascism is known as an ideology. The routes of fascism are from the ancient times of Sparta. Fascism spread in WW1 in country's like, Germany, Italy, Spain and Japan. Fascism relies on brute force; aggression, bloodshed, violence and the spreading of terror through secret police paralysing people with fear. Fascism even goes as far to education, culture, religion and art. Fascism is more or less an ideology, which seeks to replace the moral values of the divine religion to replace with pagan savagery. In Nazi Germany there are many levels to fascism, with fascism being the top layer. These lower levels come in the form of, Darwinism, Eugenics, paganism, symbols (Swastika) and secret societies. Darwin believed that the strong survive and the weak shall perish. Darwin's theory would form aggressive ideology around the world. The worst case of this happened in Nazi Germany. The Nazis thought to create a 'perfect Germany' and the 'perfect Arian race' they had to eliminate all the disabled and mentally ill German people of Germany. They done this by castrating the disabled and mentally ill people, so they cannot bring into the world, and German society similar off spring like themselves. ...read more.

Through these chains of events Hitler gained popularity, he promised prosperity for Germans. He blamed many of Germanys problems on the Jews. Fascism was always around in Germany; Hitler was just the catalyst for it. Another factor that caused fascism was fear of communism. Germany had seen what communism had done to Russia. Hitler needed a way for the government to control capitalism more directly because of there failing economies caused by post-war stress. The two options were Communism and Fascism and Germany chose Fascism out of fear of turning into another Russia. All in all fascism in Europe after WW1 come about from many reasons. Some of the main reasons being financial, broken promises of land not given and fear of communism. When Hitler came to power he was determined to make Germany a great power again and to dominant Europe. Hitler had three main aims for his foreign polices. Hitler wanted to abolish the Treaty of Versailles. The Germans hated it, especially: the tiny armed forces they were allowed. The Rhineland was demilitarised, Anschluss (union) with Austria was forbidden. ...read more.

Having a big army was important in Mussolini's policy and he wanted to increase his military. Mussolini wanted to expand the Italian Empire. He wanted to do this by taking over Abyssinia. He also wanted to restore pride after Italy was beaten in Adowa in 1886. Mussolini wanted Italy to be "free from the slavery of foreign bread", so wanted to make Italy self-sufficient. To conclude Hitler fascist views lead to a war, which cost many lives. The way Hitler gained power was scary as this kind of thing can happen again, for example with the BNP who have a few seats in politics now. It just shows when times are hard people make radical decisions which are not always the right one, as they are made at the spare of the moment. Hitler more or less brain washed the German people to think that they was this superior race to everyone else. I can understand that the sanctions set upon Germany where harsh but there are correct ways of sorting things out. On the other hand Mussolini like Hitler was deluded into thinking he could change his country's status through the use of fascism. In the end Mussolini could not escape from Hitler and probably regretted his alliance with Hitler. ...read more.