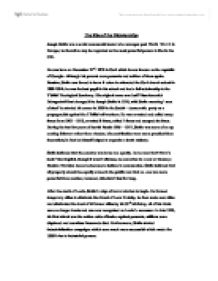 The Rise of the Dictatorships - Joseph Stalin was a soviet communist leader who managed post World War II in Europe; he therefore may be regarded as the most powerful person to live in the C20.

The Rise of the Dictatorships Joseph Stalin was a soviet communist leader who managed post World War II in Europe; he therefore may be regarded as the most powerful person to live in the C20. He was born on December 21st. 1879 in Gori which is now known as the republic of Georgia. Although his parents were peasants and neither of them spoke Russian, Stalin was forced to learn it when he attended the Gori church school in 1888-1894; he was the best pupil in his school and had a full scholarship to the T'bilisi Theological Seminary. His original name was Iosif Vissarionovich Dzhugashvili but changed it to Joseph Stalin in 1910, with Stalin meaning ' man of steel' he started his career in 1899 in the Social - democratic party as a propagandist against the T'bilisi rail workers. ...read more.

Stalin believed that all property should be equally owned b the public and that no-one was more powerful than another, however, this didn't last for long. After the death of Lenin, Stalin's reign of terror started to begin. He formed temporary allies to eliminate the threat of Leon Trotsky, he then made new allies and eliminated the treat of hi former allies by his 50th birthday, all of his rivals were no longer treats and was now recognised as Lenin's successor. In late 1929, his first attack was the nation-wide offensive against peasants, millions were displaced and countless thousands died. Furthermore, Stalin started industrialisation campaigns which were much more successful which made the USSR rise to industrial powers. ...read more.

His last major disaster was in January 1953 in which he ordered the arrest of many Moscow doctors, mostly Jews, charging them with medical assassinations. Following Stalin's sudden death on March 5th. 1953 in Moscow forestalled another bloodbath. In spite of his role as the iron fisted ruler of a mighty nation, Stalin has remained an mysterious figure and remained a notorious man in history. Soviet historians assess his regime as a great one, although spoiled by some errors, but Western scholars assail the bloody terror of his rule. Although a significant role in the armed uprising that followed the Revolution of March 1917, Stalin wasn't remembered as a revolutionary hero but he produced the impression of a 'grey blur' Three years after his death, the 20th Party Congress denounced Stalin and much that he represented. ...read more.