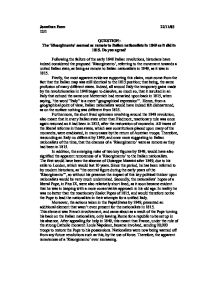 The 'Risorgimento' seemed as remote to Italian nationalists in 1849 as it did in 1815. Do you agree?

Jonathan Fenn 22/11/03 12/1 QUESTION: The 'Risorgimento' seemed as remote to Italian nationalists in 1849 as it did in 1815. Do you agree? Following the failure of the early 1848 Italian revolutions, historians have indeed considered the proposed 'Risorgimento', referring to the movement towards a united Italian state, as being as remote to Italian nationalists in 1849, as it was in 1815. Firstly, the most apparent evidence supporting this claim, must come from the fact that the Italian map was still identical to the 1815 position; that being, the same profusion of many different states. Indeed, all around Italy the temporary gains made by the revolutionaries in 1848 began to dissolve, so much so, that it resulted in an Italy that echoed the same one Metternich had remarked upon back in 1815, when saying, 'the word "Italy" is a mere "geographical expression"'. Hence, from a geographical point of view, Italian nationalists would have indeed felt disheartened, as on the surface nothing was different from 1815. Furthermore, the short lived optimism revolving around the 1848 revolution, also meant that in every Italian state other than Piedmont, reactionary rule was once again resumed as it had been in 1815, after the restoration of monarchs. ...read more.

After appealing for help in 1849, this meant that France, under the rule of the strong Catholic monarch Louis Napoleon, became involved, sending 20,000 troops to restore the Pope to his possessions. Nationalists were now being warned off from any future revolutions such as this, by the use of force. Therefore, the apparent remoteness of a 'Risorgimento' ever increasing. However, on the other hand, it is evident there are some factors that dispute whether nationalist hopes of a 'Risorgimento' in 1849 were as remote as they were in 1815. Firstly, by seeing the 1848 revolutions as a failed attempt at a possible 'Risorgimento', at least the revolutionaries could learn from their mistakes. In 1815 they had nothing to go by, but now they could contemplate on where they went wrong and what could be corrected for the future. Therefore, disagreeing that the proposed 'Risorgimento' still seemed as remote in 1849 to Italian nationalists, as it had previously in 1815. Indeed, the nationalists could appreciate the need for greater unity between the states as being divided amongst themselves, meant they were not as much of a force to be reckoned with as they could be. ...read more.

On the one hand those that agree include; the identical map of Italy, additional French involvement and remaining Austrian control, as well as the emerging roles of both Pius IX and Guiseppe Mazzini. On the other hand, those that oppose the statement include; nationalists having the opportunity to learn from their mistakes up to and including 1848-49, Piedmont retaining its constitution and its King being seen as a possible leader, to thereafter facilitate greater unity. Personally, I disagree with the statement and therefore feel that Italian nationalists were in fact far closer to the 'Risorgimento' in 1849 than 1815. Not only is this supported by the fact that just 12 years later the Kingdom of Italy was to be created in a relatively short space of time, but also that the time Italian nationalists had under constitutional rule between 1848-49, was bound to provide them with a very real experience and taste of rule that they would not want to give up. They would be inspired to fight for it and make it last, so were indeed far closer to the 'Risorgimento' in 1849, rather than just as remote to it as the were in1815. ...read more.