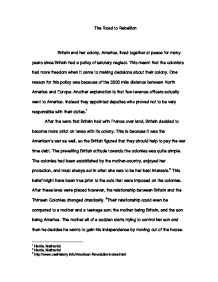 The Road to Rebellion

The Road to Rebellion Britain and her colony, America, lived together at peace for many years since Britain had a policy of salutary neglect. This meant that the colonists had more freedom when it came to making decisions about their colony. One reason for this policy was because of the 3000 mile distance between North America and Europe. Another explanation is that few revenue officers actually went to America. Instead they appointed deputies who proved not to be very responsible with their duties.1 After the wars that Britain had with France over land, Britain decided to become more strict on taxes with its colony. This is because it was the American's war as well, so the British figured that they should help to pay the war time debt. The prevailing British attitude towards the colonies was quite simple. The colonies had been established by the mother-country, enjoyed her protection, and must always act in what she was to be her best interests.2 This belief might have been true prior to the acts that were imposed on the colonies. After these laws were placed however, the relationship between Britain and the Thirteen Colonies changed drastically. ...read more.

The Americans no longer needed British protection since they were free from danger of French attack. Victory in the French and Indian war brought Britain more land, and with that more problems. After Britain abandoned its policy of salutary neglect, they started concerning themselves with North America. Britain then decided to send 10, 000 British soldiers to "protect" Americans. Colonists did not see it in that matter, they did not need protection from anybody since they had no danger of war or threats with other nations.6 The French had been defeated, and they were at peace with the Native Americans. Colonists noticed that the British troops (redcoats) were stationed in towns such as New York and Boston where there was no more danger from Native Americans than in London. The presence of the army had another purpose, to strengthen colonial governors and intimidate the colonial legislatures. 7 As if 10, 000 British soldiers was not enough trouble for the colonists, in 1765 Parliament passed the Quartering Act which required that the colonists provide shelter and food for the thousands of British troops in America. Colonists thought of this act as an indirect taxation, and they found ways to get around it. ...read more.

The Boston Massacre can also be seen as an event where people had their freedoms taken away because five colonists were killed.9 Britain was taking away so many of the liberties of the colonists, that they had to rebel. The actions of the British Government eventually led to the American Revolution because they imposed unpopular laws, sent some of the British army to live in the colonies, and they took away the liberties of the colonists. Colonists should have been able to have a say on the laws that involved them, the army should have only went to America if they were requested to by Americans and the Britain should have given colonists the same freedoms they gave their own people. After the Stamp Act was enforced, a protest took place where Patrick Henry said something very wise, "No taxation without representation". This was a very clever thing to say because he claimed that since Americans elected no members to the British Parliament, they could not be taxed by them. Britain didn't represent America in government, and therefore the laws that they gave America were wrong. 10The American Revolution was not the effect of one cause, but of many smaller causes that kept adding up. Eventually colonists were fed up with the British Government and wanted their independence, which is what they have today. ...read more.